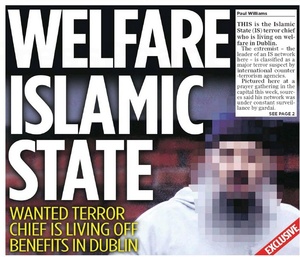 The demonisation of Muslims often leads to the thesis that we are now facing a ‘clash of civilisations’ between the west and Islam. But the only thing that matters is who the West consider its allies and enemies

The Paris attacks have led many in the media to demonise Muslims and allege that we are facing a “clash of civilisations” between the West and Islam. Those assertions are dangerous and factually incorrect.

There are many examples, but I think I found the best one of all this weekend in the Herald. Its front page reads: “WELFARE ISLAMIC STATE: Wanted Terror Chief is Living Off Benefits in Dublin; Islamic State Terror Leader in Ireland is Living on Welfare” (see picture). The article tells the story of an alleged ISIS leader who lives on welfare in Dublin.

In addition to being an attack on Muslims, it’s also a not-so-subtle swipe at welfare recipients. The reader is supposed to equate “welfare” and “ISIS” and to think they’re both evil. Readers could thus become more favourable to cutting welfare lest hard-working Irish people subsidise Islamists.

There is also an element of instilling fear among the population—people are more likely to give the government a blank cheque when they believe the nation is under threat. The terrorist described by the Herald is allegedly a “major terror suspect” and is “under constant surveillance by gardai”.

He is “of Middle Eastern origin” and “spends a lot of time in his apartment, leaving very occasionally”. He has “a long association with extremist Muslim terror groups including Al Qaeda”.

The Herald thus joins a long list of commentators who have used the Paris attacks to cast a negative light on Muslims.

Donald Trump said, “I want surveillance of certain mosques” and that he would send Syrian refugees back to Syria if he was elected President. He also called for a database of all Muslims in the United States to be set up, in order to track their movements. Another presidential candidate, Ben Carson, equated Syrian refugees to “rabid dogs”.

Such statements have real effects. A recent study found that hate crimes against Muslims spike after jihadi attacks (the study looked at Britain). For example, anti-Muslim attacks quadrupled in the UK after the Charlie Hebdo massacre in Paris.

The study’s author said the media was in part responsible for this, as “Findings also suggest that where the media stress the Muslim background of attackers, and devote significant coverage to it, the violent response is likely to be greater”.

The demonisation of Muslims often leads to the thesis that we are now facing a “clash of civilisation”, an idea popularised by the American conservative political scientist Samuel Huntington. The Sunday Independent loves that idea and many of its writers have repeated it in the last few days.

For example, Jody Corcoran writes that we are witnessing “conflict along the fault line between the Western and Islamic civilisations” and that “Islam has bloody borders”. There has been a lot of “warfare between Arabs and the West”, for example, on 9-11 and in the recent Paris attacks.

But this, of course, is nonsense because it is factually incorrect. There is no antagonism between “the West” and “Islam”.

For decades, the West has strongly supported Saudi Arabia, which is a cultural center of Islam and the most fundamentalist state in the world; the West is also strongly allied with the Gulf monarchies such as Qatar and the United Arab Emirates.

So religion is not important, what matters is “who does the West consider its allies and enemies”. Allies’ sins will be glossed over while those of enemies will find their way to front pages.

Western governments are now claiming to be offended by ISIS due to its barbaric practices. But there are no such feelings regarding Saudi Arabia (or regarding the US invasion of Iraq, to name one US intervention among many others).

For instance, talking about ISIS, former justice minister Alan Shatter said to the Herald that there was “no moral principle which says you can be neutral when it comes to a group of individuals who believe in beheading people, who glory in death, who enslave women, who inflict terrible tortures on individuals and who basically are responsible for dreadful, appalling atrocities both within Iraq and Syria and quite happy to export their fanaticism to other parts of the world”.

Concerned about beheadings? Women? Exporting fanaticism? Then focus on Saudi Arabia as much as ISIS.

Saudi Arabia reserves the death penalty by beheading for about 80 to 90 people per year ], for crimes including “nonlethal offenses, such as drug-related ones”, reports Amnesty International.

The Saudis are also well-known to export their intolerant fundamentalist version of Islam, Wahhabism, which has inspired many groups in the Middle East, like ISIS. Saudi Arabia has just sentenced to death a poet for “renouncing Islam”.

But nothing is done about Saudi Arabia. In short, there is no clash of civilisations, only power interests.

1) Patrick Cockburn is a journalist who writes for the London Independent, and he’s actually Irish. He is described by many as the best Western journalist on Iraq. His articles can be found here.

2) Robert Fisk also writes for the London Independent and is acknowledged by many as one of the best journalists on the Middle East; he is based in Beirut. His articles can be found here.

Julien Mercille is the author of Cruel Harvest: US Intervention in the Afghan Drug Trade. Follow Julien on Twitter: @JulienMercille

78 thoughts on “A Real Clash Of Civilisations”