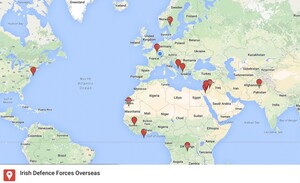 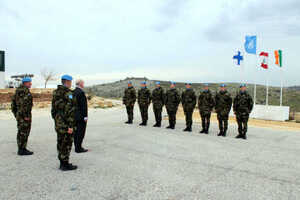 French President, Francois Hollande’s, recent invocation of article 42.7 of the Lisbon Treaty has called on all EU member-states to aid and assist France by all means in their power.

This is the first time since the Lisbon Treaty’s formal adoption in 2009 that the so-called mutual defence clause has been activated – meaning we’re all wading deep into unchartered waters.

Francois Hollande’s request came with a further wrinkle – the French army is already thinly stretched across much of sub-Saharan Africa, from Djbouti along the Gulf of Aden to Senegal on the Atlantic.

Therefore, president Hollande and his cabinet have apparently made it plain that they want other EU member states to send their military support to either Mali or Lebanon, essentially to act as stand-ins for France’s overstretched forces, so they can be redeployed in order to beef up security at home and redirect their attention towards fighting ISIS in Syria.

It is entirely unclear, and indeed, debatable as to whether this is what the authors of the treaty had in mind when they drafted the mutual defence provision in the first place.

What is clear, however, is that increasing the amount of Irish soldiers deployed on overseas missions, to approximately 850, was already on the government’s agenda long before the attacks in Paris – even if relatively few bothered to pay attention.

So it should have come as no surprise when Irish defence minister, Simon Coveney responded favorably to the French request for more soldiers – in fact, he doubled down on the strategy after attacks in Mali on Friday left 21 dead, many of whom were foreign nationals, at the Raddison Blu hotel in Bamako.

At the same time, Coveney charged that those – including myself – who have openly questioned the wisdom of sending more Irish soldiers to France’s deeply fractured former colonies, were “trying to create a story that is unfair.”

Insisting that any request to deploy more soldiers would come through the United Nations adding a further assurance that if such a request were received it would conform to the ‘triple lock principle,’ and therefore, would not violate Irish neutrality.

First, it must be said that if anything ought to be considered “unfair” here, it is Minister Coveney’s framing of IDF deployments as Ireland’s moral and legal responsibility explicitly in response to the attacks in Paris, given that the government had already decided to send an additional 180 soldiers to Lebanon beforehand.

There’s little reason to excuse this politicking, considering raising net deployment numbers has long been part of a 10 year defence strategy that the Minister himself oversees.

Second, when we take a closer look at the history of Irish foreign policy, including past deployments, it becomes increasingly clear that the idea of the so-called triple lock – and with it Irish neutrality – is as much myth as it is reality.

The triple lock principle is a rhetorical trope invented by Tanaiste Mary Harney in 2001 that essentially refers to the political process that ought to take place prior to the deployment of Irish soldiers internationally.

It was clarified in 2002 by then Taoiseach, Bertie Ahern, when he said that any deployment of Irish soldiers abroad must first 1) be approved by the Dáil 2) and the Irish government; and, 3) must be endorsed by the UN – even if only loosely.

Much has changed since then.

Writing in 2013, UCD Professor, Ben Tonra, noted that the triple lock “appears no where in Irish legislation” adding that, “In truth, the only ‘lock’ that exists … is the self-imposed legal requirement for some class of UN authorisation.”

Yet even this self-imposed requirement for UN authorisation, is no longer a guarantor of neutrality – in part, because what constitutes UN authorisation has, for the Irish government at least, slowly eroded over the last decade.

Authorisation used to mean a UN resolution explicitly establishing a peace-keeping force, this is no longer the case. In fact, since the Daíl passed the Defence Act of 2006, what counts as UN authorisation has grown into a ‘laundry list’ of terms, including “supports, endorsed, approved, or otherwise sanctioned.”

The slow erosion of what constitutes UN authorisation was, and continues to be, an intentional maneuver to circumvent the UN security council. In particular, in response to growing weariness on the part of some Irish politicians who are tired of countries like China, using their position on the UN Security Council to veto international missions that the government would otherwise support.

Of course, if we take that last point seriously, what it really means is that by 2006 the Irish government was looking for ways to side-step what was increasingly being regarded as an overly restrictive definition of neutrality.

This, then, is the non-legally binding triple lock mechanism which supposedly safeguards Irish neutrality, that Defence Minister Coveney refers to when offering his assurances. A weakly worded commitment to only partake in missions that have some level of UN support. Perhaps this slow erosion helps explain why Irish soldiers are currently deployed in 13 countries.

It would be unfair to group all of these overseas deployments together of course. The Irish Defense Forces deployment to help with the Ebola epidemic has little to do with their deployment to Afghanistan, for example. And yet grouping these missions under the same UN banner is exactly what looser definitions of ‘UN endorsement’ allows the government to do ().

It’s this grouping that allows the minister to so casually discuss IDF deployments to Mali and Lebanon as if they are interchangeable even though they vary widely. Each conflict has its own context specific dynamics and potential risks and consequences for Ireland’s national security and the the safety of Irish soldiers that must be taken into account, regardless of UN endorsement.

With regards to Mali, the growing possibility that the peace accord will fall apart, or that it was never fully implemented in the first place, means that there may be no ‘peace to keep’ – while extremists there have made a habit out of targeting peacekeepers and aid workers specifically. These, in addition to France’s colonial legacy and particular set of national security and regional economic interests, were only some of the contextual factors that Minister Coveney wanted to so quickly write off as an “unfair story.”.

Yet falling back upon rehearsed rhetorical tropes that boil down to the UN’s tacit approval of some interventions and not others does not in-of-itself provide an indicator of a mission’s legitimacy or moral standing – much less does doing so provide detailed reasons as to why Irish bodies in particular ought to be expected to fill in for French soldiers were they to redeploy to bolster security at home or ‘bring the fight to ISIS’ so to speak.

The UN’s checkered past of powerful states manipulating resolutions to their benefit, and ongoing scandals involving UN peacekeepers, including allegations of sexual abuse, can attest to the first part.

As for the second – Ireland needs to seriously consider the implications of sending more soldiers abroad, at a time when the very safeguard protecting Irish neutrality, the so-called triple lock mechanism, continues to suffer from legislative erosion AND when interlocking security arrangements between the EU, NATO, and the UN muddle what would otherwise be a fairly clear picture of what we could safely consider ‘neutral’ peace-keeping missions.

Indeed, the unprecedented invocation of Article 42.7 by Hollande, in addition to the further French government’s clarification that this aid and assistance ought to take the form of military support for EU-led UN ‘endorsed’ ‘peace-keeping’ missions in their former colonies – so they can redirect their soldiers to fight in yet another conflict beset with its own geopolitical intrigues – just goes to show how muddled this picture has already become.

Ryan McCarrel (@ryanmccarrel) is a PhD candidate in Geopolitics University College Dublin where he specializes in NATO’s relations with its non-member states.

That’s Not An SUV

36 thoughts on “The Erosion Of Irish Neutrality”