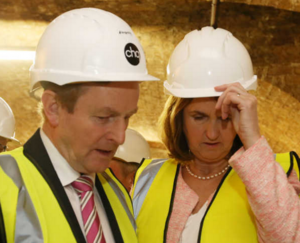 Tánaiste Joan Burton believes that a living wage “means that a person in full-time work, without additional welfare support, can afford housing, food, utilities, clothing, transport, healthcare, childcare and recreation”. She has promised to make this happen “if Labour is returned to government” (News, November 18th).

This is the sort of urgent action which should be happening right now. The Labour Party should be taking advantage of the fact that they are in Government and that they are in a position to implement this change before the next election.

Furthermore, with the whole country so far away from a true economic recovery, wouldn’t you think our Government would be working overtime to deliver as much progress as possible before the election? Positive results will get them re-elected, yes?

Instead, all of our Ministers have become a bunch of politicians making similar announcement to the one above. “If Fine Gael are re-elected this will happen”;“If Labour are voted back into power that will happen”. If, if, if. None of them deserve to be re-employed by Ireland Inc.

Paul Delaney Is Killing Us