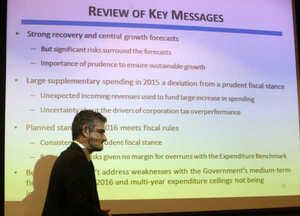 Professor John McHale, of the Irish Fiscal Advisory Council at the publication of its ninth Fiscal Assessment Report in Dublin.

The Government had deviated from a “prudent path” to use an unexpected bounty of revenues sourced from corporate tax receipts, even though it was still not totally clear whether these revenues could be relied upon in the future.

The additional spending had the effect of adding to the spending base in framing of the budget sums for 2016.

Presenting the supplementary budget so late, the Government had “deviated” from the path of financial prudence and had increased the risk that the State would fail to meet the new budget oversight rules from Brussels from 2016.

As the country adapts to the legacy of the bust, [Professor John] McHale said that the risks facing the country have been well documented “because we are going to be living with the high-debt crisis for some time”.

“We now have a target to reduce our borrowing as a percentage of national income to below 3% for next year. That will be delivered.”

“And Fine Gael and the government as a whole will continue to adopt the most sensible approach possible to our national economy because we want to make sure that the spending behaviour of the past does not wreck the recovery that is now underway.”

‘There Is A Possibility That Overheating Could Occur’

5 thoughts on “Nothing To See Here”