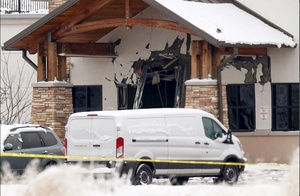 From top: A view of the damage to the entrance of the Planned Parenthood clinic in Colorado Springs, Denver yesterday; Dr Julien Mercille

We have heard a lot about Islamic terrorists recently in the wake of the Paris attacks conducted by ISIS. In general, the implicit or explicit association between “terrorism” and “Islam” can be seen everywhere in popular culture and political commentary.

But last week, we witnessed another act of terrorism, this time committed by a white man in the United States at an abortion clinic in Colorado. Three people died in the shooting and the suspected gunman, Robert Lewis Dear, was taken into custody.

This is yet another event of terrorism conducted by white people, that have killed more individuals in the United States than jihadists since 9-11, as this New America Foundation study found. The study shows that right-wing white terrorists have killed 48 people whereas jihadists have killed 26 since 9-11.

The sad thing is that the shooting at the Colorado abortion clinic is not an isolated event—abortion clinics have long been subjected to terrorist acts and harassment. The perpetrators are often linked to Christian fundamentalist groups, as noted by Juan Cole, the professor of history writing on Islam and religion, in an excellent post on the subject.

Anti-abortion extremists can be seen outside abortion clinics or the houses of those who work there with signs such as “Prepare to Meet Thy God” and “Fear Him Who Has the Power to Cast You Into Hell”.

Anti-abortion extremists have killed eight abortion providers in the US over the years. One well-known case is the assassination of George Tiller in 2009, an abortion doctor who operated in Wichita, Kansas. He was killed point-blank on a Sunday in his Church. After he was murdered, his clinic closed.

Tiller had a history of being targeted by Christian Right terrorists. His clinic was firebombed in 1986. In 1993, he was shot five times by a Christian Right woman called Shelley Shannon (who is now serving time in prison), an attack which he survived.

Targeted intimidation against doctors and staff of abortion clinics is common and on the rise (see this graph). In 2010, 27% of US clinics suffered from those types of threats, whereas in 2014, it was 52%.

This Oxford University Press book tells the stories of abortion providers who have been “physically assaulted, picketed at home, threatened over the phone, and stalked around town”.

As a result, they have been forced to “take different routes to work on a regular basis, they change their schedules frequently, they plan their living arrangements as a precaution, they buy guns, and they wear bulletproof vests.”

Yes, bulletproof vests. As one of them explained

There have been parallel political moves to restrict abortion in the United States. So far in 2015, states have enacted 51 new abortion restrictions, for a total of 282 since 2010.

It is the anti-abortion climate that occupies a large part of public discourse that gives rise to attacks against clinics. With so much of the public discourse demonising abortion, it is no wonder that some people come to believe that clinics are against God’s will or evil in general and decide to take violent means to eliminate them. It is irrational (what exactly does God have to do with abortion again?) but it happens.

And when terrorist acts are committed by white people or Christians, they rarely produce the same sensationalist media coverage. For example, white terrorists are described as “troubled loners” whereas Muslim terrorists are often suspected of being part of a global conspiracy.

Also, there’s apparently nothing that can be done to stop white terrorists because they’re bad apples that don’t represent any broader trend, whereas Muslim terrorists can be bombed and police forces boosted to deal with them.

Double standards are thus the rule in public discourse about terrorism.

When A Coup Is Not A Coup

57 thoughts on “A Whiter Shade Of Terrorism”