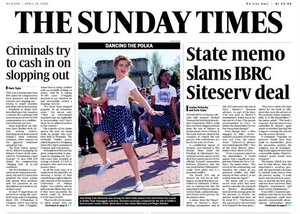 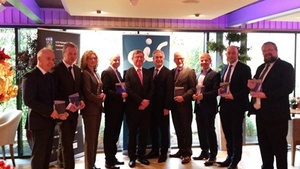 Front page of The Sunday Times on April 19, 2015; and the winners at last night’s UCD Smurfit School Business Journalist Awards

Last night the winners of the UCD Smurfit School Business Journalist Awards were announced. The winners – and their stories – were:

Economic Commentator – Richard Curran, of INM, for contributions on farmers’ borrowing, the gambling industry and the culture of tax avoidance

Business Analyst – Brian Carey, of The Sunday Times, for analysis of Aer Lingus, CRH and the sale of Waterford Wedgwood

Specialist Business Reporter – Emma Kennedy, of the Sunday Business Post, for ‘The business of distressed mortgages’

Business Interview – Emmet Ryan, of the Sunday Business Post for an interview with ‘Mattress Mick’

Upcoming Journalist of the Year – Jack Horgan Jones, of the Sunday Business Post, for three articles: ‘Kevin Cardiff’s evidence to the banking inquiry’; ‘Late rush to exploit Double Irish loophole’; and ‘Exiting the bailout – one year on’

Technology Reporter – Mark Hilliard, of The Irish Times, for ‘As the drone era has taken off let’s ensure our safety and privacy’

An Outstanding Achievement Award was presented to Matt Cooper while John Kay received Business Book of the Year for his book, Other People’s Money: Masters of the Universe or Servants of the People?.

5 thoughts on “In Business News”