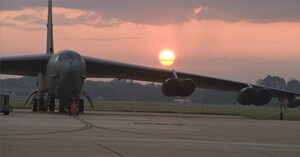 From top: A B-52 at Barksdale Airforce Base, Louisiana; Dr Julien Mercille

US Air Force commanders are now calling on the Pentagon to bomb Syria with an old war machine classic, the B-52.

The B-52 bomber is the US Air Force’s largest aircraft. And this year is its 60th year anniversary of active service.

The extraordinary thing about it, according to this New York Times profile, is that it is still flying, and will be in service until at least 2040.

It first flew in the early 1950s. There has never been any other bomber able to replace it. All the new models that engineers designed and built since then proved to be unable to outcompete it.

In the 1980s, the B-1B Lancer boasted a hi-tech radar-jamming system, but it jammed its own radar. In the 1990s, the B-2 Spirit’s stealth technology was so delicate that the plane could not go into the rain.

According to a pilot, flying the B-52 “is like driving your grandfather’s Cadillac”.

It dropped the first hydrogen bomb in the Bikini Islands in 1956. Then it went on to carpet bomb Vietnam, in a war that left between 2 to 4 million dead (we don’t know the exact number).

In more recent years, “it has pummeled armored divisions in Iraq, and has laid thunderous walls of destruction over Taliban positions in Afghanistan”. It has also flown “assurance and deterrence” missions near Russia and North Korea, which are statements to enemies that the US will not be intimidated.

Air Force commanders are now calling on the Pentagon to bomb Syria with B-52s. “We’re ready, we’re hungry, we’re eager to be in the fight”, said Col. Kristin Goodwin, who is in charge of the Second Bomb Wing at Barksdale Air Force Base in Louisiana, where half of the bombers are located.

And that’s the history of one plane only. Imagine if we added that of the whole military striking around the world, in particular the Middle East.

It’s no wonder that terrorists emerge out of those interventions. Yet, many intellectuals, including left-leaning ones, are still at a loss in explaining why the West is sometimes hit by terror.

“It’s lack of education”, say some. (As if a bachelor’s degree made you more peaceful). “It’s poverty”, say others. (As if those who are not well off were a violent herd). Other academics agonise on defining “terrorism”, as if it was all very complicated and requiring years of study.

Some are not deluded, however. For example, Robert Pape, a political scientist at the Chicago Project on Security and Terrorism, studied every single act of suicide terrorism in the world since 1980—that’s over 4,600 in total.

He says that “religious fervor is not a motive unto itself. Rather, it serves as a tool for recruitment and a potent means of getting people to overcome their fear of death and natural aversion to killing innocents”.

The fact is that terrorism is strategic. Pape is worth quoting at length as he summarises his research’s essential points:

Similar conclusions have been reached by those who interviewed ISIS fighters . The conclusion is clear: as long as the West meddles in other countries’ affairs violently, it will remain a magnet for counter-attacks.

That’s why you shouldn’t believe David Cameron or Francois Hollande or Barack Obama when they say that bombing Syria and Iraq will bring peace and security. It won’t.

If anything, it’s jeopardising our safety even more than it already is, thanks to the 8,125 air strikes unleashed so far in Iraq and Syria against the Islamic State (the UK carried out about 500 of those in Iraq).

The strikes also show that austerity is a very selective principle. David Cameron has imposed a harsh austerity regime on the UK, but there always seems to be some cash available for the Royal Air Force.

Britain began military strikes in Iraq in September 2014 at a cost of €280 million. It costs €48,000 per hour to fly a Tornado or Typhoon jet. The US has spent $5 billion on operations. These are a few more reasons to oppose the bombing of Syria.

50 thoughts on “Terror On A Wing And A Prayer”