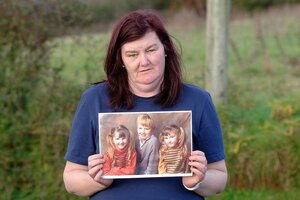 A new development in the three decade plus Mary Boyle mystery.

The twin sister of Mary Boyle has identified a new location in Donegal where she suspects the murdered schoolgirl may have been buried. The site has never been searched.

Ann Doherty has written to the Garda Commissoner Noirin O’Sullivan requesting the area be sealed off as a matter of urgency and forensically examined by a team of experts.

She has also asked the Taoiseach to intervene in the matter given her concerns about a garda cover-up in the case.

Mary Boyle vanished in March 1977 at her grandparents’ home in Cashelard, Ballyshannon. Her remains have never been found.

In the days after her disappearance, a politician telephoned Ballyshannon Station and requested that certain people were not to be considered suspects. This claim has been verified by a number of retired senior officers who were working on the case at the time.

Ms Doherty has requested the new search on foot of evidence given to her in recent days, which supports her belief that Mary was murdered by someone known to her.

The information has been provided by a number of individuals who witnessed unusual events in the aftermath of Mary’s death and also in recent times.

Several officers support Ms Doherty’s belief that her sister’s body may have been brought to the location she is now pinpointing.

Ms Doherty has also demanded that any garda search is supervised by independent experts and her legal team. Almost three months ago, she made a statement to officers in Dublin’s Pearse Street Station identifying the person she believes killed Mary.

That individual has to yet to be arrested.

Ms Doherty’s lawyer Darragh Mackin will also seek the assistance and expertise of the Independent Commission for the Location of Victims’ Remains (ICLVR), the north-south body set up to trace the remains of victims of the Northern Ireland conflict.

Ms Doherty hopes that this organisation will broaden its remit for her given her struggle for justice, allegations of a state cover-up in her sister’s murder, and the fact that Mary disappeared just four miles from the border with the North.

‘I have very strong reason to suspect that Mary’s body may have been buried in this new location temporarily or that her remains are still there. I want a search to take place in the coming days without any delay and I have informed the Garda Commissioner of this. The gardai have utterly failed my sister and me.

I am certain that Mary was brutally assaulted and killed by someone who knew her. That person is still walking around Donegal, a danger to all citizens, especially children.

I will carry out my own search if I have to but I am pleading with the gardai to finally do the right thing and bring Mary’s killer to justice. I am asking them to look into their own children’s eyes and imagine how they would feel if one of them was violently murdered and the killer was protected for almost four decades.

Nothing will stop me from finding Mary’s remains and giving her the decent burial she deserves.”

Meanwhile, the singer Margaret ‘Margo’ O’Donnell, a cousin of Mary Boyle, has criticised the gardai for their failure to arrest the chief suspect.

She attended Pearse St Station with Ann Doherty in October to make a statement identifying the person they believe is the killer. They also informed gardai that a person known to Mary told them on several occasions who killed the child.

Last night, Margo spoke by telephone to Enda Kenny once again about the murder, expressing her concerns that the chief suspect has not yet been arrested.

He said he would contact the gardai this morning to ask them why there is a delay in questioning this individual.

After his meeting with Ann and Margo in November, Mr Kenny wrote a report to the gardai and the Donegal coroner Dr Denis McCauley outlining what he was told about the murder by Ms O’Donnell and Ms Doherty during a recent meeting in Government buildings and expressing their wishes for an arrest.

However, Margo says she is deeply disturbed by a phone call she received from an officer yesterday stating that the case has been handed back to the north-west region.

‘I am deeply saddened that the cover-up of this child’s murder seems to be continuing to this day. What sort of a country do we live in where a six-year-old is brutally assaulted and murdered and the gardai and justice system turn their back on her and protect the monster who killed her?

“This case has to be taken out of Donegal where it has been covered up for almost 40 years. When the public are told the full truth about the lengths we have gone to to try and find Mary and get the perpetrator brought to justice, they will be horrified. And they will be told all about it one day soon.”

Ms Doherty and Ms O’Donnell will meet the Donegal coroner tomorrow with solicitor Darragh Mackin to urge him to hold an inquest into Mary’s death.

In a separate development, it has also emerged that a man who was arrested last year for the disappearance of Mary is considering an action against the state for unlawful arrest.

Brian McMahon was taken into garda custody in 2014 and questioned about the case despite a lack of evidence linking him to the crime. The DPP informed officers in recent weeks that she would not be pursuing charges against him.

Mr McMahon said he was shocked when his name was linked to the case and believes there has been an attempt to frame him for the murder of Mary Boyle.

He also says he cannot understand why the gardai have not informed the press about the DPP’s recent vindication of him especially since reporters were tipped off at the time of his arrest and there was widespread coverage of it.