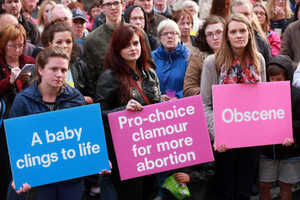 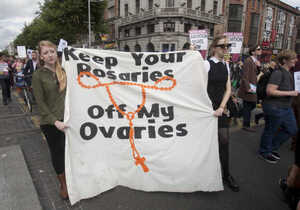 Repealing the Eight Amendment is a fundamental human rights issue but people want and need clarity in relation to the legislative framework that comes after it.

Unless your rock has remained in place above your head in recent weeks you will be aware of the re-emergence, with a vengeance, of the abortion debate in Irish public discourse. As someone who has been out canvassing I can categorically say it is the one issue that has come up for me on every single canvass. Sometimes it’s pro- sometimes it’s anti but it’s always there.

As election fever increases so too does the fervour surrounding this eternally controversial topic and its place in Irish politics. This time out it has to be different. We cannot and should not succumb to another ‘heated debate’ about the rights and wrongs of having this downright dangerous amendment in our constitution.

There is no denying just how dangerous it is, take your pick from most letters of the alphabet at this stage – they almost all represent a woman and her family who have suffered unconscionable heartache and pain under the behest of the eight amendment to our constitution.

Nobody disagrees that the constant ‘he said, she said’ tennis match style of debate is tiresome and full of rhetoric but we need to be careful that rhetoric does not creep into our proposals for legislative solutions in the event of the eight being repealed.

The familiar refrain of ‘rape, incest and fatal foetal abnormalities’ has become ubiquitous and we’re regularly told that this is likely to be as comfortable as ‘middle Ireland’ is prepared to settle for in terms of abortion legislation. But has this really been thought through?

One of the most significant of the many failings of the 2013 Protection of Life During Pregnancy Act was the complete impracticality of its proposed ‘solutions’. Aren’t we potentially running the same risk if we trot out rhetoric about rape and incest?

How exactly do we propose to deal with a situation where a sexual encounter occurs, a charge of rape is made, an arrest happens, an investigation takes place and a conviction is secured – all in the space of roughly 18-20 weeks? Is that honestly realistic? If only our justice system worked so expeditiously. Same goes for incest.

Then we’ve the situation regarding Fatal Foetal Abnormalities where medical opinion can vary widely. A few weeks back we had Renua Senator and GE16 candidate Paul Bradford telling us there’s no such thing as ‘incompatible with life’ – many of our, let’s face it, very conservative medical profession would likely subscribe to such a theory and so who gets to make the final decision?

Are we back to the scenario of a woman going through unimaginable turmoil being dragged from pillar to post to secure the abortion that is the right decision for her at the right time in her life and for her body?

Repealing the eight has got to be a priority – it is a fundamental human rights issue – but what comes next is equally important and while I agree that people want and need clarity in relation to the legislative framework that comes after it, I want that framework to be agreed in consultation with an Irish public who are not taken for granted or presumptions put upon them about ‘where they are at’ in terms of compassion and understanding for women in vulnerable and often tragic situations.

I want a framework that is not based upon what sounds acceptable but rather on what is actually practical and will ensure that we don’t add yet another letter to our depressingly full alphabet soup of mistreated women.

Anne-Marie McNally is a political and media strategist working with Catherine Murphy TD and will be a candidate for the Social Democrats in the forthcoming General Election. Her column appears here every Wednesday morning. Follow Anne-Marie on Twitter: @amomcnally

217 thoughts on “How To Dismantle The Eighth Amendment”