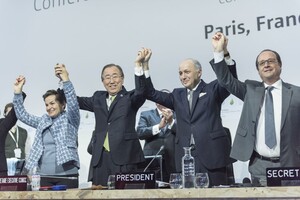 Why are Greens more optimistic about the adoption of the Paris climate agreement than the cumulative failures that have come before?

It was almost like they had taken the ball away. They reached an agreement? After the mess that was Copenhagen, six years ago, that hardly seemed likely.

It was a process that has been somewhat embellished. Less of an agreement than an understanding. A meeting of minds if not yet a meeting of interests.

Climate documents are more coy about what they are trying to achieve. The final documents from Paris makes no reference to oil or to fossil fuels or to efforts to decarbonise. They do however contain many references to renewable energy and you can’t have one without being without the other.

Paris is a voluntary agreement. There are no fines or sanctions that can be imposed for non compliance. And yet environmentalists, hoping against hope, believe for once progress has been made.

The promises are vague, the consequences of failing to adhere to them are weak. What we do have is a confirmation that a long time scientific reality is fast becoming a political reality.

The electoral cycle has also been kind. Environmental neanderthals in Australia and Canada were deposed making way for somewhat more enlightened representatives. In the US, President Obama seems committed to making progress in this area as part of his legacy. The lack of a formal adoption procedure may help. With a presidential election looming it removes the opportunity of The Republicans to pour their ignorance over the agreement.

Ireland has been passive in this process. The pathetic pleadings of The Taoiseach and the Minister for the Environment means that the country is poorly positioned to take advantage of the post carbon economy that now has to result.

The vacuity of what has been written will be open to many interpretations. There will foot dragging, policy incoherence, obfuscation and outright lies. The environmental movement faces its greatest ever challenge in campaigning for the spirit of the Paris agreement to be followed.

Knowing the hard job that still needs to be done, while realising the many opt outs that exist for those who still to deny, why are Greens more optimistic about this process than the cumulative failures that have come before?

It’s because for the first time the governments of the World seem to be collectively facing the same direction. There is an acceptance and an admission of the problem that exists. A recognition that actions are needed. There is even a realisation that without radical changes the actions necessary will prove difficult.

And yet it is all cloaked in Augustinian equivocation. Make us pure Lord but not yet. At best the Paris Agreement can be described as the time the governments of the World chose to hit the snooze button instead of trying to turn off the alarm.