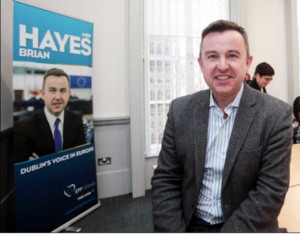 On RTÉ Radio One’s Marian Finucane show yesterday the newspaper panel discussed the recent deportation case of the so-called ‘Isil recruiter’ – a 52-year-old father of four who has been living in Ireland for 15 years.

At the end of the discussion Mr Hayes raised his concerns about individuals taking cases to the European Court of Human Rights.

Ursula Tipp: “The case began on December 21st when this person secured an ex parte – which means a one-sided – temporary injunction preventing his deportation. He was told, ‘ok, look, you get deported’, so he sought the court’s protection, the Irish court’s protection because this case is in Ireland. So the court first granted him this injunction which means it’s not a full judgement but, for the moment basically, a stay on proceedings so that he could stay. This then was actually, the second step was, it was appealed to the High Court by the State and the High Court then lifted the injunction and then the man went back against that decision to the Court of Appeal and then the Court of Appeal actually sat last Wednesday to consider and, at that point, they only had to consider the narrow issue of a stay against the High Court’s lift. And then the Court of Appeal was basically stopped in its tracks, it couldn’t make a decision on it via facts which it received from the European Court of Human Rights…The European Court of Human Rights basically based their stopping of proceedings in Ireland on Article 3 of the Convention of Human Rights. That’s a convention basically why we have the court of human rights and Ireland is a member of it…”

Marian Finucane: “And this said, you may not be returned to a country where they will torture you.”

Tipp: “Yes. It basically says inhumane or degrading treatment or punishment. OK? That’s what Article 3 of the convention says.”

Finucane: “So what happens? Does that override the Irish courts?”

Finucane: “It’s just interesting that in this week, if you take in Germany, they closed down the train stations…”

Finucane: “If you take in Brussels that they cancelled New Year’s…”

Finucane: “Similarly in Paris, because they’re afraid of what this crowd Daesh might be doing and planning against us. And like there are human rights..Paul [Williams] did you have a look at that?”

Paul Willliams: “Dearbhail [McDonald] makes a very good point here in the Sunday Independent where she says, you know, that Ireland finds itself at the heart of a legal and moral dilemma in which ISIL suspects may be waging an assault on the west by relying on its human rights laws. Like I recall, sorry…”

Williams: “Well there’s a real group, there’s a group of people still on this island send out people to murder…”

Finucane: “I get the message that you do not support Sinn Féin.”

Williams: “It’s the same thing with human rights. When people went out to commit murder and they were caught and they were shot dead by security services, then they become murdered people and then they cite human rights and I’m just trying to put it in perspective…”

Finucane: “And rightly, and rightly. That’s what we’ve been working towards..”

Williams: “Yeah and as Dearbhail says…”

Tipp: “Can I say this one thing on this one because what’s important on this case is that you know there’s this thing, you’re innocent until proven guilty. And that’s true for every human being. And that’s a very general principle. And this particular person in this deportation case is, you know, has to be seen in the same light: innocent until proven guilty. And, as far as I understand, from all that, there has not been the proof that this particular person was even involved in certain things, that proof has not been produced yet.”

Finucane: “Well they say that he’s been under surveillance for many, many years.”

Tipp: “Yes, yeah, and there might be something Marian. I’m only saying that, for the moment..”

Brian Hayes: “But this is going to become more common.”

Hayes: “The important thing about the European Court of Human Rights, this was the court that ultimately say in the Norris case which ultimately overthrew our ridiculous laws on homosexuality where Ireland was found in breach of denying rights to gay people that famous Norris, David Norris showed great courage in taking that case that subsequently had a change in law. But we now have a situation where individuals, rather than issues, are being taken to the court of human rights and this is going to create huge challenges in circumstances where we have got to confront this new terror outfit called ISIS.”

The State Is Liable

27 thoughts on “‘This Is Going To Create Huge Challenges’”