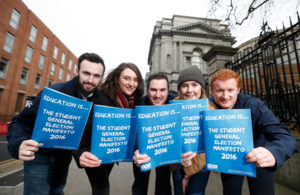 Fiona O’Malley, of the USI, writes:

“Today the Union of Students in Ireland launched their General Election Manifesto 2016 outside the Dáil, focusing on how young people will have a deciding impact on the next government, in areas like higher education funding, repealing the 8th amendment and accommodation. USI have registered 80,000 students to vote in the last two years.”

Union of Students in Ireland

So, You Know That USI Preferendum Thing?

31 thoughts on “The Student Vote”