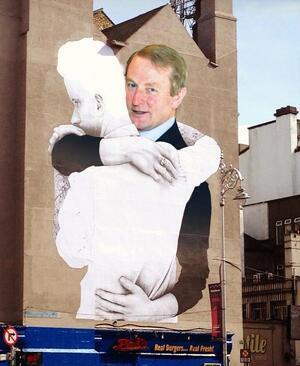 This spring, Irish voters will return to the polls to vote in a General Election and the current government partners — centrist Fine Gael and putatively centre-left Labour — will need to defend the last five years of deep austerity policies. The timing of this election suggests that pinkwashing will be one of the country’s hottest trends for 2016.

Simply defined, pinkwashing is the practice of projecting a state or organisation as gay-friendly in order to soften or downplay its more negative characteristics…”

“In Ireland, the government coalition that has established Ireland as the golden child of Europe’s austerity states — gladly imposing vicious cuts across society and lapping up the approbation of the troika — will now attempt to rinse all of that away with the success of a single political campaign, in which they demonstrate support for a single, narrow, neoliberal form of equality. This is textbook pinkwashing.

The process has already begun. The recently-launched campaign invites young emigrants to come #hometowork, appropriating the #hometovote movement, which saw thousands of young people travel home to vote ‘Yes’ in the referendum. The posters fail to explain exactly what work these returning emigrants (numbering nearly half a million since the 2008 crash, 85% of them under 35) are expected to do, in the context of extreme generational inequality and a continuing youth unemployment rate of 19.7%.

Similarly, a government minister described the opportunity to reform Direct Provision, Ireland’s controversial accommodation system for asylum seekers, as another “Yes Equality moment” (referencing the most popular slogan of the referendum campaign).

Whatever warm glow he was attempting to transmit will hardly reach those asylum seekers who have spent as much as seven years in Direct Provision centres where, as they await court judgments on their cases, they receive an independent allowance of €19.10 per week, have no entitlement to work, live with little to no privacy, and in extremely restrictive conditions.”

“The other major political event of the year, the celebration of the centenary of the 1916 Rising, will also be pink-tinged. In the course of the referendum campaign, Yes activists repeatedly invoked the promise contained in the Proclamation of the Irish Republic that the state would guarantee “religious and civil liberty, equal rights and equal opportunities to all its citizens”, pursuing “the happiness and prosperity of the whole nation and all of its parts, cherishing all the children of the nation equally”.

“No reference, of course, to the reality of a virulently Catholic rebellion (launched at Easter to represent the resurrection of the Irish people) that ultimately gave rise to a violently Catholic state. Or to the fact that when a high-profile campaign sought clemency for Roger Casement, convicted of treason and sentenced to death for his part in the Rising, British authorities had only to leak diaries revealing his homosexuality to ensure that Irish support for him crumbled.”

Is Ireland about to become the pinkwashing capital of the world? (Open Democracy)

Setting Out Their Stall