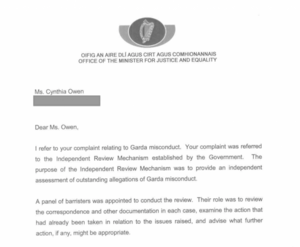 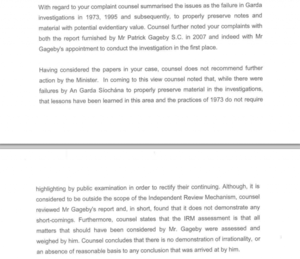 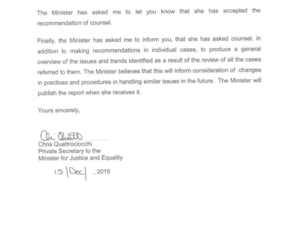 A letter to Cynthia Owen, explaining why the Independent Panel Review has recommended that no further action be taken in regards to her case

You may recall a recent post about Cynthia Owen.

It followed her using Facebook to name the people she said were among a paedophile ring operating in Dalkey, Co. Dublin, that abused her in the 1970s.

In the post, Cynthia explained that, after the Independent Panel Review recommended no further action be taken in respect of her case, she wrote to every member of the Dáil – asking them that, should they be elected, if they would ensure she gets a full inquiry into her case.

I received a reply from Willie O’Dea and Joe Higgins to inform me they have written to Frances Fitzgerald, about the matter. Joe Higgins informed me that Ruth Coppinger will be asking the Taoiseach about my case on Thursday in the Dáil and that he would send me the question and answer when he receives it.

Pádraig Mac Lochlainn replied and actually provided me with two appointments to come to Leinster House to discuss the matter with him. This is the first time since 1996 I have ever been invited by any TD to meet with them at Leinster House. I replied and explained that I live in the UK, but I sent further information to help Padraig understand my case and decide how he can help me.

Richard Boyd Barrett, Clare Daly and Mick Wallace are already supporting me and bring my case up regularly in the Dáil. They have been outstanding in their support. Niall Collins has previously pledged his support but he has not answered my email or been in touch since the Minister turned my case down for an inquiry. However I do note that Niall is calling for a more comprehensive and independent review of the cases.

Joan Collins responded and said she has brought up my case before and will do so again.

I am astounded at the way myself and all the panel review victims have been treated, and cannot believe that no one in Fine Gael will stand up and do what is necessary. I feel particularly betrayed by Fine Gael, in that Enda Kenny was corresponding with me before he became Taoiseach, and that Alan Shatter was my lawyer for four years before he became Minister for Justice.

Both these men have extensive knowledge about my case, and yet sit by a review done by Patrick Gageby which, in my opinion was seriously flawed and was made up of information given to him by a Garda who was friends with the men who abused me and with my father.

This nightmare just gets worse and worse for me with each passing year, I cannot believe I am now in my 23rd year of fighting the Irish authorities for justice for Noleen.

I really thought that with Frances Fitzgerald would act to end the torture and suffering I go through, day in day out, instead she just joined the long queue of other politicians in Ireland that are too frightened to do what needs to be done in this case.