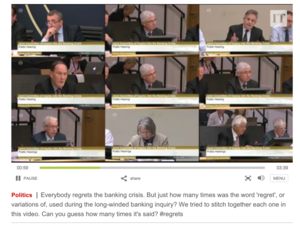 A screen grab from The Irish Times this evening

Following on from the publication of the Banking Inquiry report…

The Irish Times has published a video of witnesses who used the word ‘regret’.

The report found that property revenue for the Irish Times ranged from €10 million in 2002 to €22 million in 2006 – at its peak, accounting for 17% of the newspaper’s total revenue from all sources. The equivalent figures for the Irish Examiner and Independent News and Media were 7% and 14% respectively.

Well, they had no regrets.

Regrets, they’ve had a few. But can you guess how many? (Irish Times)

21 thoughts on “No Regrets”