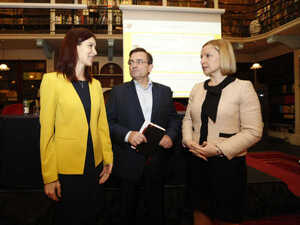 Can you handle it?

Our taxes are not ‘stolen’ from us – they pay for nurses, guards, building schools and Michael Noonan’s salary.

As part of a debate I took part in on Renua’s ‘Flat Tax’ on the Pat Kenny show on Newstalk yesterday, both Pat Kenny and Eddie Hobbs (who made the case for Renua) referred to the situation where “if you are paying over 50% of your income on tax then you are working 6 months for Michael Noonan and the next 6 months you are working for yourself”.

This once more highlights the need for a reshaping of the discussion around tax.

Tax is not ‘taken away’ from you, ‘stolen’ or a ‘burden’ – we get our taxes back through the schools our children go to, the roads we drive on, the buses we use, the hospital we go to.
Renua has put its 23% ‘flat tax’ proposal as the corner stone to its Election Manifesto for the coming General Election.

Analysis of the figures show that it is a policy that will benefit the most higher income earners and wealthy.

The results from Renua’s tax calculator shown in the graphs below highlight that if their flat tax (plus graduated income benefit) was introduced: 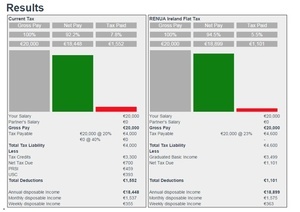 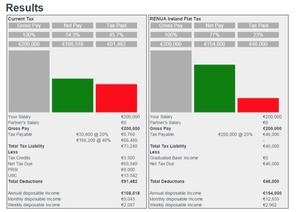 This change would significantly worsen our already serious problem of income inequality where over half of all income goes to top 20% of earners.

KPMG’s supportive analysis of the flat tax, which Renua has drawn on, states that the flat tax would result in an initial shortfall of between four and five billion in tax revenue. While the Revenue have calculated that it would lead to a shortfall of €9bn.

Renua and KPMG argue that the shortfall would be made up relatively quickly as a result of the increase in economic activity and spending from the tax cuts which would feedback through increased consumption and employee tax.

However, both the IMF and OECD in studies on countries that have implemented the flat tax have found that such an increase in revenue has not been consistently found.

Introducing such a flat tax will therefore undermine the (already low) tax base in Ireland (as will other tax cut proposals such as cutting the USC). It is repeating the mistakes of the Celtic Tiger tax cuts that lead to austerity when unreliable taxes such as stamp duty collapsed in the economic crash.

So where will the much needed tax revenue to pay for high quality public services and infrastructure come from? Where will we fund the additional nurses, guards, teachers, hospitals, social housing, elderly care, roads, flood defences, schools that we all know needs substantial increase in public spending and investment?

Currently we have the lowest investment in capital infrastructure in the history of the state. On the basis of planned cuts to the USC and the current government policies then by 2019 we will end up with the lowest government expenditure in the EU. Renua’s proposals would make this crisis situation even worse.

It is also worth pointing out that the countries that Renua point to as models for Ireland to follow are Estonia, Latvia and Singapore. Lucinda Creighton writes in their opening introduction to their Manifesto that Renua’s aim is for Ireland ‘to become the Hong Kong of Europe’.

But the graphs below show that Hong Kong is one of the most unequal places in the world. Their levels of inequality are double that of Ireland –and worse than the grossly unequal US.

As for Estonia and Latvia, these are the two most unequal countries in Europe. These countries follow the free market, laissez faire, economic models which see the top and wealthy gain the most. 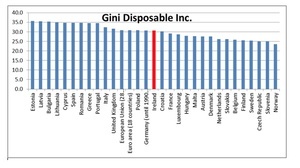 It also important to highlight that income tax is only one part of the tax people pay. There are also indirect (consumption or stealth) taxes such as VAT, motor tax, A & E charges, water charges etc. VAT takes in a third of all taxes. And lower income households pay a 5 times higher rate of their gross income on these consumption and stealth charges than those on higher incomes.

So we can see that the focus on reducing income tax and USC benefits higher income households more. And they know this.

In an Opinion Poll for the Irish Times in September last year – which social class group was most in favour of a cut to the USC? You guessed it – it was the highest social class AB.

Which begs the question – are the political parties clear that they are shouting loudest in favour of the interests of the top 20% when they argue for these tax cuts?

The opinion polls also show that this obsession with tax cuts by Renua (and most of the other political parties) is not what the public is looking for.

In fact, the polls show that a majority favour investment in public services rather than cutting taxes.

The recent Eurobarometer poll shows that in Ireland people’s main concerns are housing (34%), health and social security (29%) and unemployment (32%) – with tax much less of a concern (9%). While the Behaviour and Attitudes survey commissioned by TASC in June 2015 showed that almost 70% of people felt the government should prioritis investing in public services rather than spending money to cut income taxes.

Of course our tax also goes to pay for Michael Noonan’s salary (which, as with all politicians – is way too high) but that is not the point. The point is that the argument of tax being ‘stolen’ from us or ‘taken’ – or the phrase the ‘tax burden’ – distorts the truth about tax.

The truth is that we get our tax back through public services – when we use a hospital, go to college, drive on a road, take the bus.

And that is why rather than cutting taxes – we should be finding ways to fairly raise the taxation base (such as introducing a third higher rate of tax on incomes over €100,000 or a wealth tax on financial assets).

Hopefully this truth will see some light during the noise of the election debate.

Dr Rory Hearne is a Senior Policy Analyst with TASC, the Think-Tank for Action on Social Change. His regular column appears here on Wednesday mornings. Follow Rory on Twitter: @roryhearne

77 thoughts on “The Flat Truth About Tax”