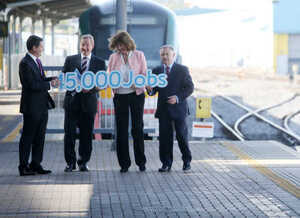 Ireland has the lowest level of public investment in the EU bar Malta and Bulgaria while just three companies account for 70 per cent of R & D investment.

Voices from the fiscal orthodoxy insist we should use the additional resources to pay down debt – as if a few percentage points are going to protect us from external events.

There are others that call for tax cuts but that’s a poor economic response whatever about its political appeal (which, if the Millward Brown poll is anything to go by, looks to have little popular appeal).

So how do we start, continue and protect recovery?

One word: investment. Investment is the driving force behind enterprise success, economic growth and social prosperity. Investment drives growth, increases productivity, enhances skills, reduces costs and puts business and the economy in a stronger competitive position. You want to be competitive? Invest.

The problem is that Ireland has a poor investment record. And no one is talking about this in the election campaign; therefore, no one is talking about how to address it (if you’re not aware there is a problem, it is more difficult to solve it). The fundamental driving force behind economic growth and i’ts nowhere on the agenda.

Historically, Irish investment has been below the EU average – even during the boom times.

The following looks at Irish investment excluding dwellings and intellectual property/R&D. The latter – a new category under Eurostat’s recently introduced ESA 2010 – is excluded simply because it inflates investment numbers without necessarily contributing to growth.

For instance, multi-nationals are re-locating IP activity into Ireland from tax haven locations. But to what extent this is making any real contribution to growth-generating activity is open to question. 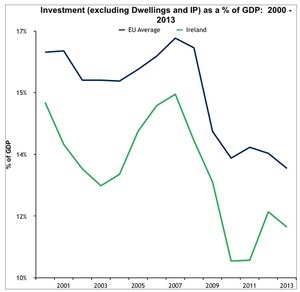 As seen, Ireland has been a consistent under-performer. Regarding investment prior to the boom, Davy Stockbrokers didn’t pull any punches.

‘Perhaps the greatest legacy of the bubble period of 2000-2008 is our road infrastructure. The value of our roads leaped from €13bn to €27.5bn. That accounted for almost 30% of the increase in our ‘core’ productive capital stock (i.e. capital stock excluding dwellings, retail and transportation / storage).

The reduction in journey times and greater certainty of planning have helped to significantly boost output per capita across the economy. But it is interesting to note that most of the rest of the increase in our core’ productive capital stock was related to the state or semi-state sectors. It was not driven by private enterprise.’

So what was private enterprise up to? As Davy points out, it mostly went into the unproductive housing and property sector.

The above Eurostat data only takes us up to 2013. There is evidence of a rebound in 2014 as pent-up demand breaks through. But this is only a temporary phenomenon if the Central Bank’s projections hold up. The Central Bank is estimating a growth of nearly 20 percent in machinery and equipment this year but they expect this to fall back to 5 percent by next year.

It is fortunate that we have what Dr. Aidan O’Regan calls: ‘ a path dependent state-led developmental strategy to attract inward Foreign Direct Investment from large global firms in high-wage, high-tech service sectors.’

It has been this public agency driven strategy – and not austerity and structural adjustment – that moved us out of recession and into fast-track growth.

Were it not for this we would have to rely on the indigenous sector and this would not be good news at all. 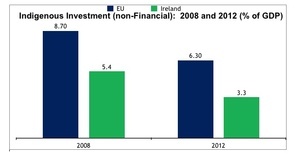 The Irish indigenous sector – excluding the construction sector – ranks near the bottom of the EU tables when it comes to investment.

It was low starting out at the beginning of the recession. It is even lower now. Where there is some growth it comes from the spill-over impact of multi-nationals in the ICT sector.

This is not the stuff of campaign fireworks but it is the stuff of economic growth – poor overall investment, poor public investment and poor indigenous investment. It will not be easy to transform this.

Irish private capital has, for decades, been content to sink money into finance and property. Finding new routes into the productive sector will not be easy. But there are some headline proposals to consider:

First, substantially increase public investment to our historical level by 2021. This could mean an additional €8 billion to €12 billion in capital expenditure. Yes, I know – this is more than the fiscal space allows and doesn’t factor in the need to increase spending on public services and social protection. Short response: stop this tax cutting nonsense and start debating which taxes we will have to increase in order to raise public investment levels.

Second, drawing on the lesson from Davy Stockbrokers analysis, drive investment through public enterprise. This has the benefit of not impacting on government debt or the fiscal space. This will require strategies to create new public enterprise companies, expanding current ones and promoting partnerships with private sector companies (e.g. the ESB/Vodaphone partnership to roll out advanced broadband).

Investment is the key to starting, continuing and protecting recovery. This is the issue we should be debating – how much, where it should go and how it can be done. This would turn a desultory debate over tax cuts into an informed one based on growing the economy. That would be a debate worth tuning into.

Michael Taft is Research Officer with Unite the Union. His column will appear here every Tuesday. He is author of the political economy blog, Unite’s Notes on the Front. Follow Michael on Twitter: @notesonthefront

Michael Taft: Allow Me A Moment To Pontificate On Job Creation

8 thoughts on “The Investment Defecit”