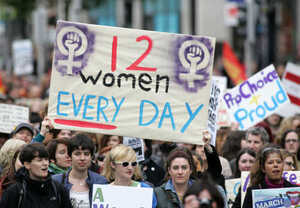 Supporters at the March for Choice in Dublin in September 2012

At the Michael O’Donnell theatre in the Dublin Institute of Technology Bolton Street.

Those speaking in favour will include Dr Peadar O’Grady, of Doctors for Choice; Vanessa O’Sullivan, of Abortion Rights Campaign; Gerry Edwards, of Terminations for Medical Reasons; and Ailbhe Smyth, of the Coalition to Repeal the Eighth Amendment.

Was It For DIT?