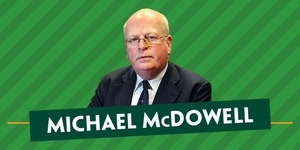 Sticking his oar in or trolling the electorate?

If Labour are at 8% and Sinn Féin are at 15% on first preferences, the Left and protest vote may coalesce around Sinn Fein and other Left candidates in terms of second and later preferences.

There may, on current trends, be few transfers in practice from FG candidates (either by way of surpluses or eliminations). That might yield “Workers Party”-type electoral outcomes for Labour.

Will the Government’s latest “Scare the S**t Out of the Voters” strategy (I only use the language of an anonymous Government spokesman) work?

Does anyone really believe that a FG-FF coalition would be “riskier” or “worse” for the economy in terms of employment, interest rates. investor confidence or sustaining the “recovery” than a minority FG-Labour coalition with independent support?

Some might well say that they are reluctant to leave Sinn Féin as the largest opposition party.

On the other hand, leaving FF and SF together for a short period as the alternative Government to a shaky FG-Labour minority mish-mash might be just as scary in the long term.

Unless things suddenly change in the polls, we are in for a change of some sort in Government.

Enda will still be Taoiseach when the Dáil reconvenes. But I doubt whether he will scare the voters into handing him and Labour another chance.

Michael McDowell: Does anyone really believe that a Fine Gael/Fianna Fail coalition would be riskier or worse than a minority FG/Labour partnership (Paddy Power Blog)

Ivan Got News For You

4 thoughts on “The Punter’s Friend”