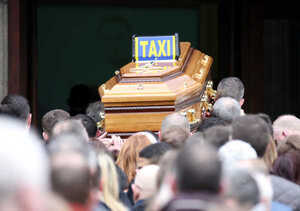 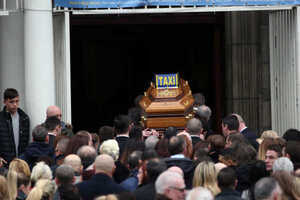 The remains of father-of-five taxi driver Eddie Hutch arriving at Our Lady of Lourdes Church on Sean McDermott Street, Dublin. They were taken from his sister’s house on Portland Row to his funeral. Mr Hutch was shot dead at his home last Monday week. He is the brother of Gerry ‘The Monk’ Hutch.

Brenda Power: “I can’t have been the only person, Sean, who was astonished byt that display in Francis Street last week. I went to see it. This, you know, a funeral rite is meant to be a celebration of the dead person’s life but also a call for mercy, for, to acknowledge their repentance, you know, an acknowledgement that the person did not live a heroic life, nobody does and to pray for their souls. There wasn’t a hint of that about what I heard from that church. Not a hint of it and not only that, and I know it is difficult for individual priests to take a stand on this when there is clearly no leadership, coming from higher up but there didn’t have to be a eulogy, there didn’t have to be a eulogy which referenced what a great fella this man was, how good he was to his pet rabbit and how his singular skill was doing back flips at parties. That was not David Byrne’s singular skill. I felt, as Christian and as a Catholic, horrified by what I heard out of that, absolutely horrified. And I make no apology for saying the priests and the Catholic church in this country, if they have any regard for themselves or any respect for their institutions or ceremonies they should really abhor that behaviour.”

Power: “A BMW laden with flowers steered up the aisle of the church, I say that is blasphemous.”