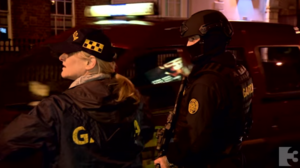 It appears as though nothing in this State is immune to the modern need for rebranding, even where there appears to be neither want nor need.

The new Swat-style uniform being worn by members of An Garda Síochána on the streets of Dublin last week now (above) no longer carries just the word “Garda” but also “Police”. Is this an image-enhancing marketing ploy?

Tell Me Mom When I Get Home

55 thoughts on “Police Under Cover”