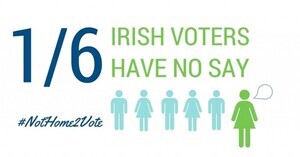 At 2pm today, Irish emigrants will be sending a message home that 1/6 Irish voters will have no say in tomorrow’s #GE16.

Nearly half a million people left Ireland since 2008, including 80,000 young people. Most forced to leave because of government policies and are now being told to return home by the very politicians who pushed them away.

The Thunderclap campaign will broadcast a message from Irish emigrants at the moment the broadcast moratorium starts. The message to the next government is to put emigrant voting rights on the agenda. Still time to sign uphere

Taking the boat #HomeToVote again tomorrow. Cheapest flights are £180, unsurprisingly most Irish in london are not: https://t.co/lI4NxYc9Ev

145 thoughts on “Let The Emigrants Speak”