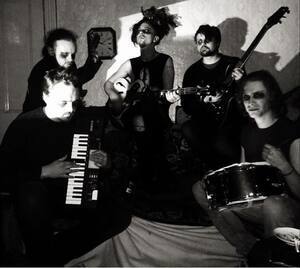 01. Cork-based “death-pop” ensemble The Vincent(s) this week unveiled the video for new single Aleister, from upcoming full-length Death to the Vincent(s).

02. It’s a more immediate and raw sound than we’ve heard from the band, off the back of previous singles Opium Den Song and Song for the Sea.

03. The latter of those two was given a ridiculously fuzzy, doomy remix by Courtney Taylor-Taylor of the Dandy Warhols, who’s said to have remarked that the band “the sickest and most totally believable heavy rock motherfuckers ever” after a set at Sea Sessions a few years back. As you do.

04. They play Tricky McGarrigle’s in Sligo tonight, Cyprus Avenue in Cork tomorrow night, and the Roisín Dubh in Galway on Thursday night in support of the new video and upcoming new material.

Verdict: These lads have been slogging away for the past few years, and it’s starting to work out, with last year seeing high-profile support slots emerging from hard touring. Expect to hear more from this crowd this year.