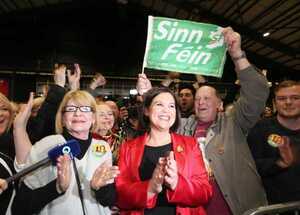 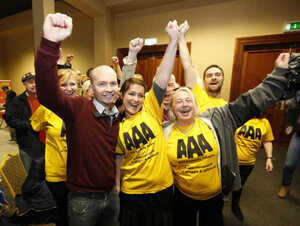 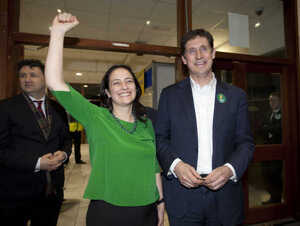 Is a left-wing government possible?

So the election dust is settling a little. So what did people really vote for and what should the Left parties and Independents do about government?

Clearly the people voted to reject the former government of Enda Kenny and, particularly, the Labour Party. The scale of that rejection is a political earthquake even though lots of commentators are trying to downplay this.

The demand for change was the rejection of the ‘recovery’ narrative that promoted an economic recovery and ignored the housing and health crises. It was also a rejection of the promises of USC cuts and instead people wanted investment in public services.

The government, as I have been arguing on Broadsheet and elsewhere for a number of years, absolutely failed to give sufficient priority to the social costs of austerity and the pain that so many people are still suffering.

It was, above all, a rejection of politicians who failed to fulfil the electoral promises and commitments they made. People were angry at the political choices that failed to protect the most vulnerable – children, lone parents, the disabled, the sick, disadvantaged communities – both in cities and rural areas.

The Left parties – and I include the broad spectrum in this (Sinn Féin, the AAA-PBP, Social Democrats, Greens and Left Independents) should get together and develop a coherent Programme for Government that they should propose to the Dáil when it meets on March 10.

Combined, they are now a significant block of almost 45 TDs. They could have a rotating Taoiseach with each group having a six-month term. Isn’t it time to shake up our democracy and government?

Their Programme for Government should be called, A Plan for a Fair and Equal Ireland – A Plan for Society’s Recovery – and include the following:

The setting up of an Irish National Health Service – providing universal public health for all citizens (from primary care to hospitals, mental health and community services)

Abolishing Irish water, water charges and initiating a referendum to enshrine water as a public good

Commit to holding a referendum to Repeal the 8th Amendment

Implement a referendum to insert economic, social and cultural human rights (right to housing, health) in the Constitution

I don’t think there is anything the broad left parties would disagree with here. So why don’t they come together and put this forward as an alternative Programme for Government and seek the backing from TDs in Fianna Fáil and Fine Gael.

Labour could decide whether they are going to go back to their social justice roots or continue the path of austerity.

This would show that the Left is serious about government and that it has a clear policy platform. It would also show whether Fianna Fáil is serious or not about a fair Ireland.

Fianna Fáil understood the mood of the people and explicitly made the case for investing in public services over tax cuts and contrasted themselves with the government’s approach.

They presented a ‘centre Left’ campaign during the election and stole the policy ‘clothes’ of the Left. So where do they stand? Will they go back to their right-wing and corrupt policies of the Celtic Tiger era or take a new direction?

A Programme For A Fair and Equal Ireland, presented publicly by the Left parties, would be a good opportunity to explain to the people of Ireland what exactly the Left stands for and how it concretely proposes to achieve a fair, equal and sustainable Ireland.

It would show that the Left is not just divided and torn apart, incapable of mounting a serious challenge and taking power.

This would also really represent the desire for real change expressed by the people in this election. This democratic will should be the main focus in the formation of a new government rather than a narrow discussion around personalities and party interests.

People have voted for society to be given as much priority as the economy. They have voted for a fair and equal Ireland which has high quality public services. This represents a significant shift in the political value base of voters.

There is an onus on this block of broad Left TDs to come together and put forward a coherent policy alternative that could achieve an Ireland of social justice and equality.

They should not repeat the mistakes of the Labour Party and compromise on their core policies. They should only enter government if their mandate and policies are fulfilled.

But they do need to step up now and offer a clear alternative direction for a new government.

Dr Rory Hearne is a Senior Policy Analyst with TASC, the Think-Tank for Action on Social Change. His column appears here every Wednesday. Rory is an independent candidate for the Seanad NUI Colleges Panel. Follow him on Twitter: @roryhearne

119 thoughts on “An Alternative Programme For Government”