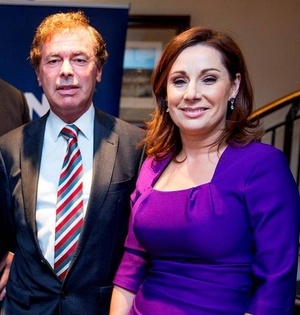 During the interview Mr Shatter spoke about ‘truths not being told’ and the ‘framing and manipulation of events’ by the party’s back room staff.

Alan Shatter: “I was running with a good colleague, Josepha Madigan. Our objective was to win the two seats but it was absolutely clear to me a few days before polling day that that would not be achieved and that we were going to win one seat and, at that point in time, contrary to agreement, a vote management arrangement was imposed which won’t only have the effect of my losing the seat, I’ve a simple view of politics..”

O’Rourke: “Do you think they decided at headquarters that they knew there was only one seat in it for Fine Gael and they decided it was going to be Josepha Madigan, rather than Alan Shatter…”

Shatter: “No, I don’t know if that’s the case but there’s one basic rule in politics, being a member of the Dáil is a great privilege of public service. It’s not a right and it’s the electorate’s right to choose who they should support. The difficulty is in the context of the Fine Gael party we have a very loyal, basic electorate, over and above those who might support us on some occasions and not on others. And they’re used to getting directions, signed by the Taoiseach, requesting they vote for a particular candidate. And I now know that there are people, particularly in the Clonskeagh, Kilmacud area of my constituency who feel they were grievously misled. They were led to believe that two seats would be secured in circumstances in which I was warning not only were two seats not going to be secured but the strategy be implemented would effectively result in me losing my seat. In saying that I do not in any shape or form want to take away from the success of Josepha Madigan and I genuinely wish her well in the Dáil and I’m sure she’s delighted to have been elected. And I…”

O’Rourke: “Right and just on that point, now I don’t exactly remember the words that Brian Hayes [FG director of elections] but I raised this with him yesterday, he was on the programme, and he indicated I think that that was done with the agreement of the local organisation, not something that was imposed.”

Shatter: “No, no, it was imposed. I had a meeting with our director of elections and it was acknowledged that this was not an agreed strategy and it was quite clear. I think, I appreciate Brian acknowledging that they got the strategy wrong and to take responsibility for it. I think it’s unfair for Brian Hayes to be regarded as solely responsible because we had been informed. A poll had been taken, to which I had given absolutely no credibility of any description and which was absolutely, it produced results, which absolutely was at variance with my understanding of what was happening on the ground and unfortunately I was proved to be correct in that my views were entirely ignored. But this isn’t about me, it’s ultimately about those who vote for the Fine Gael party, feeling they can trust and rely on what the party is saying, they can trust instructions…”

Shatter: “I can’t speak of experiences for other constituencies. Merely I think there’s one basic  important thing  which is a political party must regard their candidates, their TDs as people, not as little chess pieces to be moved on a chess board and when you’re involved in a general election campaign, there must be some trust when individuals involved in that campaign are reporting back what’s happening on the ground. Those sitting on Mount Street, or elsewhere in the Fine Gael headquarters,  can’t be gazing into a crystal ball, deluding themselves as to what they expect might happen and then giving directions that have no reality. And I think there was an element of delusion in this campaign which was based on the experiences of the conservative party in England where there was this perception that in the last week of the campaign, that regardless of what the polls was saying, droves of electors would support the party – clearly that didn’t happen.”

O’Rourke: “Well who ran the show there? Because there were senior ministers put in charge of this campaign, not just Brian Hayes as director of election but your successor in the Department of Justice, Frances Fitzgerald;  Simon Coveney; and Leo Varadkar. They were a kind of triumvirate of Cabinet ministers.”

Shatter: “Well I don’t think Brian Hayes should be a fall guy of the outcome of the general election. And I think the outcome is more, there are major issues beyond strategy. This isn’t just strategy, but if I can finish off dealing with the strategic issue. It is quite bizarre that you had three senior Cabinet ministers involved in, for practically a year running committees,  to work out where the strategy went and Frances would have been chairman of the strategy committee; Leo, god help us, the communications committee, cause the communications were a disaster; and then you have all the back room group. And there is a problem with the manner in which the party internally is now organised. There’s, as I say, a perception, I think, at leadership level that you can frame and manipulate events to the benefit of the party and indeed bring…”

O’Rourke: “But sure that goes back to the days of Garret Fitzgerald and Peter Prendergast in 1981…”

Shatter: “And that ultimately in ’87 proved to be a disaster… and that you can bring the general public along with you and that, on occasions, you don’t necessarily tell the full truth about events. And I think there is a problem in the context of the sort of praetorian guard of the party, the non-elected officials who are also engaged and were engaged in the campaign. And I would hope now the new parliamentary party will require that there is a full examination of how this election was planned, of how the message was framed, of the lack of flexibility during the course of the campaign, to realise things were going wrong and to effect change. It’s very important that that’s seriously examined. There’s also another issue within the party which is that the members of the parliamentary party need to take back to themselves the role that they should play. I don’t believe, for example, that party officials, such as the Taoiseach’s advisors, attend meetings of the parliamentary party which is something that’s developed in recent years but never happened in the past.”

Shatter: “I’m now on the outside looking in and I don’t want to be firing spears at individuals but clearly the Taoiseach has questions to ask himself and to answer about the manner in which the campaign was conducted.”

O’Rourke: “Do you think he should remain as leader of the party?”

Shatter: “Well that’s obviously an issue for the parliamentary party, the most immediate issue of great importance to our country, because this isn’t all about the Fine Gael party is the formation of Government. And I’m hugely concerned about the direction in which that may travel.”

Shatter: “Well I think that it’s very important that, for example, our parliamentary party is people of experience and new people. I think it’s important that the newly elected members of the party who rightly are entitled to celebrate their election, aren’t besotted by the fact that our members of the parliamentary party and they ask hard questions about the future of the party and the party. It’s important, colleagues who have been successfully reelected, don’t hold back on their views in the hope that Fine Gael back in government means they’ll get ministerial preferment. I believe if we’re going to engage in consultations which should be engaged in, Fine Gael remains the lead party in the Dáil, there are very basic Fine Gael principles that are not just in the interest of the party but in the public interest, to be protected and by that, for example, I mean that we need to ensure, whatever agreement might be entered into, that people who properly obey the law, aren’t penalised, and people who defied the law aren’t rewarded.”

O’Rourke: “Are you talking about there about Irish Water charges?”

Shatter: “I think that’s one of the very particular issues. We also need to ensure that where issues of difficulty arise that the truth is always told about that issues, those issues and that other approaches aren’t taken for the sake of political expediency.”

Shatter: “Well I think that, I come back to something I said earlier, I think one of the difficulties with this election is that some of those engaged in the election planning and I emphasised only some and I think it would be unfair to apply this remotely to others, I think have managed to get themselves into a state of mind that no matter what happens, you can deal with events and manipulate those events to either avoid controvesy or to achieve some benefit. I don’t want to get into any particular detail at this time, it’s something I might return to in the future but I do think..”

O’Rourke: “What are you talking about?”

Shatter: “I do think it’s important that the truth is told about issues of difficulty and that the public aren’t misled. In the context of entering into any arrangements for the formation of a government I think it’s important that we truly examine, one, what’s in the interest of the country, secondly, what’s in the interest of the Fine Gael party, and don’t enter into short-term arrangements simply for the sake of particular individuals who are remaining in power. I think that’s a very important issue.”

O’Rourke: “Well are you talking primarily there, it seems you are, about Enda Kenny?”

Shatter: “No, I’m not going beyond, Sean, what I’ve said, but I think there are important issues….”

Shatter: “In a nutshell it [the Guerin Report] related to allegations made by a Garda whistleblower, the complaints he made had not been properly addressed by me and that I ignored serious Garda failures and a report by Mr Guerin seemed to substantiate that but he produced a report without ever discussing the issue with me. We’re now in a space and everyone has forgotten this where Judge Higgins has been quietly conducting hearings in an inquiry, an investigation into all of these matters over the peat 12 months or so and I can’t speak in detail about what’s happening within that Commission of Investigation…”

O’Rourke: “No but you could answer the question though because you’ve gone on for a minute and a half – was the Taoiseach panicked into nudging you in the direction of resignation?”

Shatter: “Well what I’m going to say is that I expect, when the Higgins report is published, people will have a very different insights and understandings of those events and I believe that matters relating to Guerin, both prior to Mr Guerin reporting and the manner in which the report was dealt with by the Taoiseach should have been dealt with entirely differently and I’m hopeful that that will become absolutely clear in time to come.”

37 thoughts on “Stabbed In The Front”