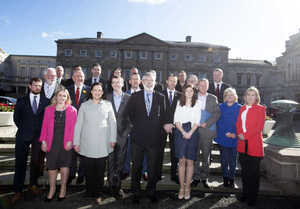 From top: Gerry Adams and Mary Lou McDonald with new Sinn Féin TDS on the plinth at Leinster House last week. Party members take the industrial wage and give the remainder to the party; Anne Marie McNally

Politicians not taking the full TD salary while diverting the rest to their political coffers are misleading the public.

Politics in Ireland – it’s a mess. For myriad reasons but not least the bamboozling political funding process that throws up so many questions with very few straight-forward answers thus leading to another bona-fide reason to mistrust the political system in Ireland.

There’s a widely held view that there is golden pot at the end of the Dáil rainbow and a trough within which snouts are firmly placed.

This view is not helped by elected politicians who try to make a virtue from the fact that they’ll supposedly only claim half their salary. What those politicians aren’t so quick to tell you is that what they mean by that is that they WILL take their full salary but they’ll choose to give half of it to their political party.

It’s the equivalent of you saying that you are refusing to take your thirty or forty grand per year salary because you’ve chosen to give half of it to the local boozer on nights out.

You take the money and you do what you choose with it, that’s really irrelevant to the person paying your wages and in the case of politician’s that’s the tax payer.

The average industrial wage argument is does not and should not apply to political salaries. You are not paying average industrial workers; as citizens you should be expecting highly competent/qualified individuals willing to work 24/7 on the issues affecting the quality of people’s day to day lives. It’s no small thing.

The fact that in far too many instances we don’t get that quality of representation should not be used as a tool to denigrate the nature and the purpose of the role. Like any other profession the salary must be commensurate with the level of work involved and the importance of the role. If it is not then you are less likely to attract the best qualified people towards it.

I would personally argue that the salary is in no way a deciding factor for those of us who believe public service is a vocation rather than a career but the point remains that appropriate remuneration for what should be, if done correctly, an extremely tough job.

What level that ‘appropriate remuneration’ should be set at is an entirely different conversation but in the meantime it is important that citizens are not misled by politicians who give soundbites about not taking the full salary whilst taking the full salary and diverting some of it to a cause of their choice – in most cases their political party coffers.

Even less clear to the public is the way in which Electoral Acts funding works or even what it is and who is or isn’t entitled to it.

Any registered political party that achieves at least 2% of the national vote is entitled to party funding. Every percentage increase above that 2% increases the amount awarded.

Independents, whether part of a grouping or not, do not receive such funding. Any party that did not meet the 30% Gender quota target but achieved above 2% will have their funding halved – this applies to Renua for example.

Every elected Oireachtas member is entitled to ‘Leaders Allowance’ – Independent TDs are paid it directly while it is paid to Party Leaders in respect of every TD elected for that party, again the amounts differ depending on how many TDs the party has or whether or not it is in Government.

If a TD leaves their party between elections, the party continues to receive funding for them but the TD in question gets nothing – this clause can be more powerful than any Whip in keeping backbenchers silent when they disagree with party policy.

Expenses, allowances and all the rest is a conversation for another day but my point here is that citizens shouldn’t be misled by politicians who try to use the confusing nature of the Irish political funding model to convince them that they are only taking the ‘average industrial wage.’

86 thoughts on “Giving It Away”