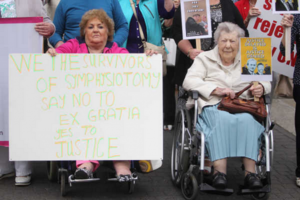 You may recall how around 730 women, who’ve had a symphysiotomy and applied to the redress scheme, have until Sunday (March 20) to notify the Symphysiotomy Payment Scheme if they’d like to have their records returned to them.

Otherwise, they will be destroyed.

On Wednesday FP Logue Solicitors wrote to the Data Protection Commissioner, stating the destruction of records – either against some women’s wishes or without their consent – “would be a grave violation of their fundamental rights under European Union and international human rights law.”

This morning, the Irish Examiner reports that Marie O’Connor, of Survivors of Symphysiotomy, is calling on Health Minister Leo Varadkar to stop the plan from going ahead.

In a statement, the Department of Health said: “Any potential destruction of documents submitted to the scheme, in line with Section 46 of the Terms of the Scheme, would be undertaken solely to ensure the confidentiality of Applicants.

“It is important to note that only copy medical records have ever been received by the scheme, the originals of which remain with hospitals or possibly with a solicitor if providing assistance to an applicant.

“In the circumstances, any applicant’s mind can be put at rest that her medical records cannot be lost by any action of the scheme.”

“All The Evidence Points To A Systemic Cover-Up”

No Consent, No Contract

‘The Fact Is: Medical Records Are Missing’