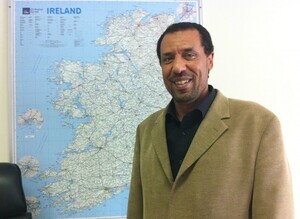 Dr Ali Selim, of the Islamic Cultural Centre of Ireland

Seán O’Rourke: “The Government here has said that an attack in Ireland, that the assessment is that it’s not likely but, at the same time, we cannot consider ourselves immune from the threat. Would you agree with that assessment?”

Dr Ali Selim: “Well I think we are very immune because the problem is happening in other countries. They have talks, they can have international dimensions. As you heard some of your guests talking about some social issues over there in terms of inequality, in terms of lack of access to work and some of the other problems, that they drive members of certain communities into ghettos and push them away from activities and rights the broader society is entitled to.
But, also, it has an international dimension. So if look at some countries who are bombing muslim countries and killing muslims over there and that affects the main muslims stream in the sense that these atrocities that happen in muslim countries, they’re not condemned in actual fact. They’re accepted. And they’re seen as something usual. What happened in Brussels is an atrocity and is condemned but what is happening in Syria, on a daily basis, is also atrocity but is not condemned. Previous to that, we had three explosions in Turkey. We haven’t heard about them in the West, nobody condemned them, nobody talked about them. So it gives muslims the sense that there is a duality, double standard, a high level of hypocrisy that we need to, we need to target. People are talking about integration, in fact in today’s time, in terms of globalisation, we have to talk about developing what can be classified as common values, common…”

O’Rourke: “Right but I suppose people are most interested in what happens closest to them and it’s understandable, for instance, that the Irish media is much more fixated on what happens in Brussels today than maybe they were about what happened in Istanbul several days ago.”

O’Rourke: “Because it’s close, it’s local. And they identify with places maybe that they’ve been to, that they know people who are working in these other cities. It’s not that they, it’s not that some lives are more valuable than others, it’s just, it’s just the way, the people, it’s just part of the human condition I would suggest.”

Selim: “Well in today’s world, where we live in a small village, what happens in Turkey is as close as what happens in Brussels. So I find it really difficult to accept this argument but actually what I would say that, the muslims are exposed to ethnic cleansing in a number of places all over the world and this has been, has not been brought to light. And people in the West simply don’t hear about this. You see tackling the problem of, of what people are facing in Brussels…”

O’Rourke: “Yeah but just coming back close to home, and again, you might have an interesting insight on this. I mean for instance, following the massacre of holidaymakers, including three Irish citizens on a Tunisian beach in June of last year, the Dublin Imam Shaykh Dr. Umar Al-Qadri invited muslims to march against ISIL on O’Connell Street. Now, from an estimate, is it what? 15,000 muslim people living in Ireland, only 50 or show, sorry 50 or so, showed up for that march under the banner of ‘not in our name’. Would that suggest or could people interpret from that that there’s a lack of concern?”

Selim: “It’s not lack of concern actually. The way, the main mosque…”

Selim: “No the way the main muslim organisations looked at that, they looked at it in a way that if something happens, we issue press statements, we express our condemnation, but we do not demonstrate on the street for something like this. And let me ask you…”

O’Rourke: “Why not? As a matter of interest. Wasn’t it an expression of solidarity?”

Selim: “Well if a Catholic person commits a crime in any part of the world, will you be demonstrating on O’Connell Street? You won’t be doing that you see. But you might issue a press statement and that is how…”

O’Rourke: “No but I mean if the people claiming responsibility for it were claiming that they had the authority for this for some sort of perverted interpretation of Catholicism, well then maybe people might.”

O’Rourke: “And are you unambiguous in your condemnation of the radicalism that’s behind these terrorism attacks?”

O’Rourke: “Dr Ali Selim, thank you very much for coming in…”