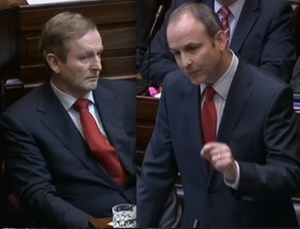 The numbers simply dictate that Fianna Fail and Fine Gael must work together in some form no matter what the outcome is to be – Coalition or a Minority led government.

Minority/Majority. Tomato/Tomato…etc. etc. What’s going on with the political scene nationally and do we really understand the merry dance we’re being led on as the two old behemoths circle each other in an awkward scenario where one won’t tell the other that they fancy them so they’ll keep on pretending things are normal and silently hope the other will find the nerve to eventually say ‘let’s talk.’

As they engage in their awkward charade the general public continue to be fed baffling spiel about ‘options’ and what might occur.

There’s lots of talk from the hacks and analysts among us about various scenarios, potential participants and the motivation, or lack thereof, of those participants to make scenarios work.

To the average Joe it’s dull, tedious and frankly difficult to understand given the spurious narrative being trotted out by lazy journalists with their own political agendas. I work in the game and I still have to keep running the numbers through my head and double checking where it’s at.

The Irish Times coalition number cruncher is probably the best tool to make you realise the impossibility of the situation that certain people are trying to convince us is possible.

Here’s where we’re at; the magic number required to form a Government is 79.

Fianna Fáil has 44 (43 now that one from their ranks was elected Ceann Comhairle), Fine Gael have 50. So between them they hold 93 seats.

If they had the chats and decided to jump into bed together then that’d be that. By all accounts they won’t. The likely scenario at the moment is that they have the chat and decide maybe, possibly, to go for a drink together but each buying their own while engaging in a very suspicious relationship that requires the company of others on their various dates.

Those others get to call the shots quite a bit on how the relationship develops and survives and can actually break-up the relationship at any point along the way. It’s hardly a Tinder match made in heaven now is it?

And what of the others? We’re not talking about one or two like-minded individuals here; we’re talking about an eclectic kaleidoscope of political persuasions and interests.

The type of hangers on who could ruin a blossoming romance with the drop of a single demand – be it a colosseum for Killarney or the overlooking of a report in Tipperary.

Sinn Féin the third largest party with 23 seats have categorically ruled themselves out of any support so those 23 seats are not up for grabs by either of the big Two.

While both Fine Gael and Fianna Fáil would have us believe right now that they both have a chance of forming a Minority Government what they are not making so clear is the fact that they cannot even do that without some form of agreement with each other.

The numbers simply dictate they must work together in some form no matter what the outcome is to be – Coalition or a Minority led by either/or.

It may be that one agrees to abstain from the vote for Taoiseach in order to make the Minority possible (it’s not yet clear which one will win the numbers race but Fine Gael appear to be in the lead) but agree they must.

Let’s imagine for a moment that Fine Gael have managed to convince even 10 Independents to support them (an extremely unlikely unrealistic prospect) that still only brings them to 60.

So even if they somehow managed to convince all the other smaller parties to abandon their principles and go into Government with them (a prospect with zero grounding in reality) they’d still only add 2 from the Greens, 3 from the Social Democrat, 6 from AAA/PBP and 7 from Labour they still only have 78.

Therefore even in the most wildly ideal scenario for Fine Gael it’s still not possible for them to reach the magical 79 without some input from the old foe who they actually hold the candle for.

So while they both spout rhetoric in the media (aided and abetted by some journalists) about others having to ‘step up to the plate’ it would serve us all well to realise that the only plate in town is the one they will share as they drop the awkward charade and finally get it on.

The first date may be a disaster and the whole thing is called off before it ever gets going but either way there’s no getting away from the fact that the date has to happen.