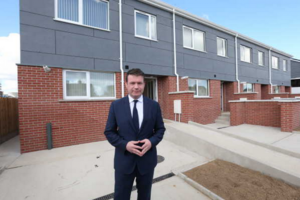 Further to yesterday’s forum on housing and homelessness in Dublin, during which acting Environment Minister Alan Kelly claimed the constitution prevented him from fixing the housing crisis…

Mr Kelly, according to himself, is an unsung hero who tried to save us all from vulture funds, mean landlords and undesirable developers. The whole time that the media and homelessness charities were claiming government inaction on the issue, Mr Kelly was trying again and again to pass remedying legislation, only to be foiled every time by that nefarious constitution.

…Mr Kelly stood beaming and posing outside one of the [modular] houses [in Ballymun] as if he was about to start hosting his own episode of Room to Improve.

You’re not supposed to use “modular housing” for the “fast build” homes, which are finally almost finished, over budget and well over deadline. They cost more than other properties for sale in the area, and there are concerns that they looked suspiciously more like permanent, normal houses where people could end up living for years.

Neither were any of the journalists but most of them noticed something strange about the houses. Is it normal for temporary housing to be made of bricks?

“No,” Bríd McGrath, the head of social policy for Respond Housing Association, said.

The houses are very warm and nice and big. A bit like ministerial offices, only a tad smaller, one presumes.

“I’d say they’ll have problems getting people out of these,” Ms McGrath said as the camera flashes exploded around a temporary minister who, unfortunately, doesn’t have the option of staying put.

I tried to save you, insists unsung hero as he scuttles for the door (Ellen Coyne, The Times Ireland edition)

Previously: ‘There Was No Concrete Plan’

Help Is On Its Way

‘I Was Told To Fake A Miscarriage’

68 thoughts on “The Houses That Alan Built”