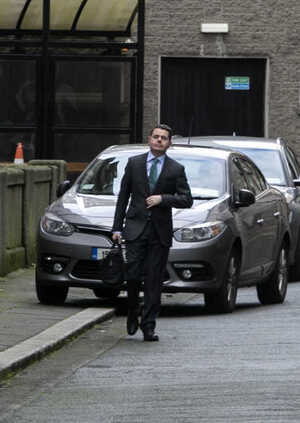 Richard Crowley: “Are you then, as this stage, prepared to flesh it out in more detail, give us more detail of what exactly is on offer. For instance, and this hasn’t been answered satisfactorily, are you talking about a rotating Taoiseach?”

Paschal Donohoe: “The reason it hasn’t been answered is this is something that hasn’t been discussed by either party.”

Crowley: “But are you proposing it? That was my question.”

Crowley: “Are you open, are you open to the idea of a rotating Taoiseach?”

Donohoe: “What we are open to is having discussions with Fianna Fáil in relation to how stable…”

Donohoe: “No, excuse me, let me come in there. This isn’t about keeping matters secret or not.”

Crowley: “Well, I’ve asked you the question are you open to discussing…you didn’t answer it.”

Donohoe: “Richard, again, Richard again – if you’ll allow me to finish the point – what we are looking to do is put together a stable Government for the benefit of our country and want to have discussions in that spirit with all parties…”

Crowley: “But you won’t, you won’t tell me whether or not that involves Fine Gael being open to the idea of a rotating Taoiseach?”

Donohoe: “Because at this point what we are putting on the table is the principle of  a partnership government and the fact that that principle has now been rejected is why it’s so important that we make clear to Fianna Fáil but, beyond that, to the country, what this is all about…to the right thing for the country.”

Crowley: “I know, I know, everybody knows that, with respect minister, you’re just insulting the intelligence of the listeners by telling them how important this is. They know that and that’s why they’re waiting for the detail of this deal. But you’re not in a position to give it, for instance where or what would be the role of the Independents in this partnership plan you’re proposing?”

Donohoe: “Well, with respect to you, Richard, I think it’s up to your listeners themselves to make an evaluation on the answers that I’m attempting to put to them and there’s few people who’ve greater respect for your listeners, and for the electorate, than somebody who’s trying to get elected on their behalf…”

Crowley: “Then tell them what’s on offer.”

Donohoe: “Richard, again, for the third time, I’d like to answer your question you’re putting to me. What we’re saying here is in relation to the further point that you brought to me there is in terms of what the arrangement would like with the Independents. We had a discussion with the Independents, all of the Independents earlier on in the week, which, they were all present, in which we made clear to them that we wanted to put this broad arrangement on the table to Fianna Fáil. And based on the response that we had back from them, we then offered further opportunity to see what would be the policy platform upon which we could jointly govern…”

Crowley: “By the way, by the way, minister. The Independents also say that they didn’t know that what was on the agenda yesterday for that meeting between Micheal Martin and Enda Kenny was the notion of this grand partnership that would include a role for them. They weren’t aware that that was on the agenda either. Why not?”

Donohoe: “Actually Richard, it’s my understanding that Deputy Michael Healy Rae earlier on today, on one of your other shows, said that they were aware that we were going to be putting such proposals to Fianna Fáil.”

Crowley: “So you told formally that this was going to be discussed. And as for their role in this, are you, have you laid out specific roles in terms of number of seats at Cabinet [inaudible].”

Donohoe: “Ah no Richard, sure, of course we can’t get to that point yet. What we have to do and what we’re looking to do is respect the decisions that the Independents themselves may make and I respect that, I respect the situation they find themselves in. And sure nobody can get to a point of discussing something like that until we’re finally clear on who wants to play a role in Government. And that is the decision, now, that each of us, all of us, need to make now in the coming week.”

Crowley: “So the offer, just to clarify, very quickly, as I know you’re in a rush to go…”

Donohoe: “Ah no Richard, I’m delighted to be on with you, I’m happy to spend as much time with you as you’d like to have me on for.”