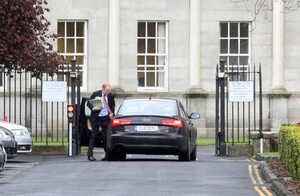 How is it then, Micheál Martin has decided to throw caution to the wind and to the detriment of the country, go for the even bigger historic prize of being Taoiseach of a FF single party government, when the proposed FG led minority government collapses in chaos.

Is it really possible that this is the FF plan? The answer is Yes. Based alone on childish excuse that they cannot accept Enda Kenny’s ground breaking offer of partnership (coalition) government, because they promised the electorate that they would not go into coalition with FG

First of all it is difficult to imagine this being an issue with FF supporters on the doorstep in the lead up to the election as there were few early indicators that FG were going to lose as many seats as they did. And even less indicators that FF were going to win as many extra seats as they did. So why would possible coalition between FF and FG be a major issue on the doorsteps, when health, housing, jobs and water etc. were the main issues surfacing in the media and radio phone-in’s?

Secondly, If as Micheál Martin claims, they are precluded from going into coalition with Fine Gael because of commitments they made to their supporters, how can he square offering to support a FG led minority government, which means endorsing its policies with far less input than would be the case if they were an equal partner in a partnership or coalition government?

When you wipe away all the spin, there is only one logical answer, Micheál and his advisors have come to the conclusion that if they let FG and a disparate group of well-meaning but incompatible independents form a government, there will only be one outcome, total disillusionment by the electorate with FG and independents, resulting in the opportunity for FF under Michael Martin to return the grand prize of a single party government.

Far fetched? One had just to look at the muscle-flexing taking place in the person of FF TDs like Barry Cowen, to see that all elements of any responsibility for creating the economic collapse of the country has been excised from their memories.

Fine Gael and Labour bore sole responsibility for the state of the health service, housing crisis, etc, and the Soldiers of Destiny are going to ride in and rescue the country from further mayhem, whenever their strategists reckon the time is right to pull the plug.

The problem is, a rather weary electorate with short term memories, may indeed concur with their plan.

One suspects that if Brian Lenihan, had survived and become leader of FF, he would have had the foresight and courage to grasp Enda Kenny’s offer as quickly as he did the invitation to speak at the Michael Collins Beal na Blath Commemoration in West Cork in 2010.

Micheál Martin is not without courage, as he displayed in pushing through the ground breaking cigarette ban, when Minister for Health. Or again, when he resigned from the government in 2011, to challenge Brian Cowen.

Now he has the chance, not only to go down in history as a mould breaker by taking up Kenny’s partnership offer, but also to do the right thing for a country crying out for statesmen, not just run of the mill political party leaders.

Eamonn Farrell is founder of Rollingnews.ie

19 thoughts on “Call Of Destiny Blocked”