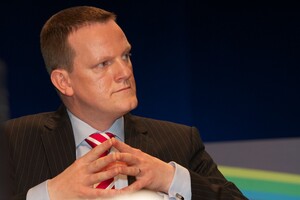 They were discussing public sector pay demands when things got a little heated.

Niamh Lyons: “My understanding of it is is that you know when you talk about USC and water whatever, those are the issues on the table that would be the basis of a deal that would allow them to do business. I’ve no, I think you’d be making a very big jump to say that they’ll sit down and agree together what policies they’ll discuss, as in, you know, the pay issue…”

Cormac Ó hEadhra: “Well they’ll have to talk surely about Lansdowne Road and reopen that..”

Alan Farrell: “I wouldn’t be, I wouldn’t be 100% sure and and very much like Thomas [Byrne], you can’t have the negotiation on live radio. But what I suppose, I could say would be that if it were to end up in the negotiations, it would probably be a good thing because clearly it’s something…”

Ó hEadhra: “The public representation we have in this..”

Farrell: “Do you wanna talk on your own? Will I leave…”

Farrell: “Would you like me to answer your question or do you want me to leave? Cause I’ll leave Cormac.”

Ó hEadhra: “I want to know your position on this because I’ve been asking you. In fairness Alan Farrell…”

Farrell: “There’s nothing fair Cormac about the manner in which you conduct these interviews.”

Ó hEadhra: “It’s absolutely fair because there’s nothing fair to the public servants who want answers or the general public who want, who are homeless and who are on hospital trollies and whose children are being abused and don’t have social workers. There’s nothing fair about that.”

Ó hEadhra: “There’s nothing fair about that.”

Ó hEadhra: “We were discussing forming a Government.”

Ó hEadhra: “And I’m asking you…

Farrell: “And what I’m telling you and I’ve repeated now three times, Cormac, if you continue to talk over me, Cormac, there is no point in me being here.”

Ó hEadhra: “What’s your position, let me ask you once more, on Lansdowne Road, do you personally, as a Fine Gael TD want to reopen Lansdowne Road in your talks with Fianna Fáil?”

Farrell: “Well I don’t know whether they will arise and I’m not on the negotiating team so I won’t be taking part in that discussion.”

Ó hEadhra: “What’s your position as a Fine Gael TD?”

Farrell: “My personal, my personal view is, if I take two, in fact, three categories of public servants, the first being An Garda Siochana. I’ve always and I’ve said this publicly on a number of occasions when I was a member of the Oireachtas Justice Committee for five years that entry-level gardai are not paid enough. €23,000 is completely insufficient. I have said it publicly at committee and on the floor of the Dáil that a two-tier entrance system for members of the teaching profession is completely unacceptable, i.e. a starting teacher today versus I think a starting teacher in 2011, I think is paid about €3,000 more, less I should say, which equates to about €250,000 over the course of that person’s career. An nurses, whether my view is their not paid enough, the reality is that they are leaving this country in droves because they can get more money elsewhere. And that applies to doctors, NCHD, it applies to public consultants, it applies to a whole range of public sectors workers, right across the…”

Ó hEadhra: “And you would include Dublin Bus drivers in that as well?”

Farrell: “No, that question hasn’t come across my desk.”

Farrell: “No I don’t believe that, well, the question hasn’t come up so I don’t know, I can’t…”

Ó hEadhra: “Ok, I see it did come up, in talks at least, when the Luas question came up.”

Farrell: “Well perhaps as a comparison between a private company and their employees trying to benchmark themselves against the public company…”

Ó hEadhra: “So let me get this right: You say ‘yes, possibly’ to some pay increase to gardai, some…”

Farrell: “And it is my opinion that they should be paid more. I was even more direct than you suggest.”

Ó hEadhra: “And nurses and teachers, but not Dublin Bus drivers?”

Farrell: “Well I don’t know how much Dublin Bus drivers are paid.”