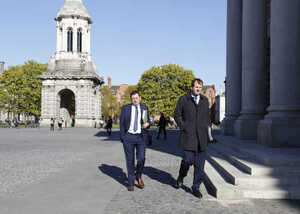 You don’t abandon your political philosophy and direction in order to facilitate the establishment of a Government whose philosophy is entirely at odds with yours.

Antagonism, confrontation, scepticism, Devil’s advocate; call it what you may, it is the song of the Irish political commentariat when it comes to dealing with politicians trying to articulate a position.

Whether you agree with the position or not is irrelevant – you should still be afforded the opportunity to listen to it and make an assessment based on the argument and not the opinion of the presenting broadcaster of the hour.

As someone involved in communications and messaging it can often be difficult to find a way of articulating a position in a way that will survive the inevitable mainstream media cynicism and its tendency to lean in favour of the safe and comfortable establishment of which it is undoubtedly a part.

You know if you met Joe or Josephine Soap on the street and explained your position they’d understand – they may not agree – but they’d understand it whereas by the time the media has parsed your message there are so many grey areas you could be the next E.L.James.

Op-Eds (Opinion pieces) can be useful in this regard but are notoriously difficult to have placed and certainly not available to you on any type of regular basis.

Right now we’re at the epicentre of the phenomenon. Political correspondents and broadcasters are frothing at the mouth to update you on what’s happening in ‘Government formation’ talks.

Lines are spinning from inside and outside political camps and nobody is sure from one minute to the next who is prepared to deal with who and if ‘being out of talks’ really means what it says and vice versa.

This confusion is entirely understandable, we’re now on day 54 of formation talks and with the Lannigan’s Ball shenanigans ongoing for so long who wouldn’t be confused.

My own party, the Social Democrats, sought to avoid such confusion by laying out a very clear position from day one – the arithmetic returned by the electorate means that no matter how much we dislike it, the only option for Government is based on agreement between Fine Gael and Fianna Fáil.

Everything that happened in between with Independents and other parties was simply a distraction that has served to delay the process. We didn’t want any part of that. We continue to take a very straightforward position despite the baying of the ‘step up and be responsible’ mob.

We have stated very clearly we will NOT be participating in Government however we will work constructively, with all parties, in a newly reformed Dáil in order to elicit the best outcomes for Irish society.

In a Minority Government scenario the opposition will be equally, if not more, powerful than the Government benches and as a result the Dáil will have to drop the Punch and Judy style politics and judge issues based on their merits rather than their proposers. That benefits everybody.

To my mind political responsibility is about standing for something you believe in, it is not about abandoning your political philosophy and direction in order to facilitate the establishment of a Government whose philosophy is entirely at odds with yours and whose direction for the country is one you actively campaigned against.

To do so would not be responsible it would be downright selling out. You know that old cliché ‘if you don’t stand for something you’ll fall for anything?

A Government for the sake of a Government and with every and any direction is not one worth having and I for one am not willing to fall for anything.

172 thoughts on “On Political Responsibility”