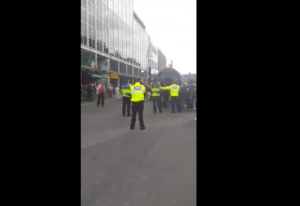 A still from a video of a Traveller horse and wagon being stopped by gardaí in Dublin city centre yesterday during the Reclaim 1916 parade.

Here is a video from the Reclaim 1916 parade on [yesterday]. The experience was marred by gardaí telling us, at the last minute, that we couldn’t bring the horse and wagon up O’Connell Street. We believe that this was for genuine health and safety reasons. However, we feel that the situation wasn’t handled as it should have been.

And we wanted to be able to make our statement walking past the Daniel O’Connell statue and arriving at the GPO – given the centenary anniversary that was in it. We’re glad to report that we did make it onto O’Connell Street to take our rightful place – and we got great crowd support. After all it was the people’s parade.

35 thoughts on “A Rein On Our Parade”