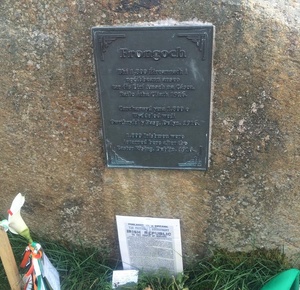 After the Easter Rising hundreds of Irish ‘prisoners of war’ were sent to Frongoch, a distillery-turned-internment camp in Wales.

All that is left is a fading plaque.

Last Sunday on the 100th anniversary of The 1916 Rising, I made a planned visit to Frongoch. There was once housed an internment camp where more than 1800 Irish prisoners from The Rising were taken.

What strikes you on arriving is the sparsely populated isolation of the place. What exists there is a primary school and a small shop/cafe. Nothing else.

The road it is on links the not exactly sprawling but picturesque metropolis of Bala and the eerie destination of Trawsfynedd, which hosts one of the two (now decommissioned) nuclear plants in Wales.

The region seems to have been ideal for generations of decision makers as the best repository for social, political and environmental dumping.

It seems there was once a more thriving Frongoch. The internment camp had once been a distillery. I imagine some Whitehall wag thought this was the most appropriate place to send a small town of bothersome Irish people to.

Nothing exists now of that distillery or the prison it became. There is a just an empty field. A thought occurs that like Hitler’s Berlin bunker, someone has decided it should not be seen as it once was, lest it becomes a place of unwelcome pilgrimage.

On the roadside as part of a parking lay by a memorial stone has been erected. The plaque has lost its lustre. On it a simple sentence of historical fact has been embossed. It is in Irish, Welsh and English.

At its base there are a smattering of ageing flowers, a plastic tricolour and a laminated Declaration of The Republic. The impression given is that of a handful of souls who want it to be remembered, with no body being officially responsible.

For the few brief years of its history as a place of incarceration, Frongoch seemed to almost transcend its grimness. It became known as the University of the Irish Republic.

These idealistic young men, once detached from blood lust, sought to imagine a new nation. For the most part they succeeded.

The place where they plied their learning deserves more recognition than it has. Perhaps the thought of the British Empire beginning to collapse from within Britain itself is not a narrative some may want to hear. We should hope that relations between our nations have since evolved beyond that.

Separatism as a movement has gained a lot traction in recent years in the UK. I can’t see any real parallels with the Brexiters of today. They are seeking to renew old dreams of past glory into a new world of splendid isolation. The internees of Frongoch were more intent on bringing a new nation to stand with and work alongside other nations.

I remain uncomfortable with the use of violence to further any political end. I have come to accept that the context of then cannot be applied to now. That tolerance does not, nor should it apply, to those from 1970 who sought to emulate the Frongoch generation.

That generation was engaged in a programme of nation building, the other has been an exercise of national frustration.

20 thoughts on “Letter From Frongoch”