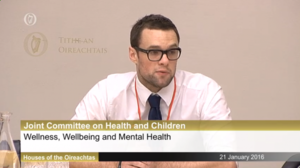 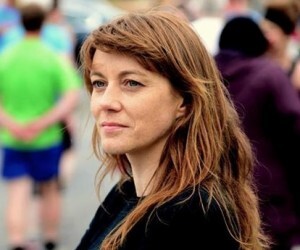 Niall Breslin, aka Bressie, before the Joint Committee on Health and Children in January

Fiona Kennedy, who has clinical depression and borderline personality disorder, yesterday wrote the following on the Facebook page of her Sunny Spells & Scattered Showers blog:

There. I said it.

(I’ve had a very long day, I’m very tired and my patience threshold is below zero)

That was an hour ago. I’m even more tired now, but having driven in and out of town to collect Hubby, I’m also wired, and I’ve had time to think.

On reflection, there is a whole lot more going on than simply being pissed off at two people who are doing one of the most crucial thing that needs doing to get the ball rolling on changing our mental health services – talking. Raising awareness. Letting people know that asking for help is ok.

But that’s where I hit a pitfall, and I think that’s at least part of where my frustration is coming from. It’s not what Bressie and Jim Breen are doing that’s the issue, it’s the media portrayal of it.

The media (and this is all very much just my own opinion) can’t or won’t see beyond that. Mental illness isn’t just depression and suicide, in as much as physical illness isn’t just cancer. There are such a broad range of issues, and within that range, hugely varying degrees of severity and need. Every single person is different.

We could also be forgiven for thinking that difficulties only arise with the under 25s. Again, I’m not discounting the value of the work that’s being done here, god knows if I’d had more awareness when I was younger then things might have turned out very differently for me.

We absolutely need to get to kids when they’re in school, we absolutely need to work on breaking down the stigma around mental illness. I would love to think that this whole palaver with our mental health services is something my kids will never have to contend with.

But what about those who are over 25? Or even over 18? I posted a piece last week by a 17-year-old reader who faces a very uncertain future once she turns 18 and transitions from child and adolescent to adult services.

What about those of us who are that bit older, who aren’t hearing the message in school or college? Or those who don’t have ready access to social media? What about workplace mental health? Or those who aren’t working? And what about our older generations? Who is the voice for them?

I think that’s what my issue is. Both these men are giving voice to a particular section of the population, and they are doing it quite remarkably well. But, (and again, just me!!) there are two key issues with this:

One of my readers posted this comment in response to my little rant, I think he sums it up nicely:

‘Thanks for saying this, Fiona. We are doing a mental health awareness programme at work and it is just about depression. Yes depression is a terrible thing but so are BPD, Bi-Polar, Schizophrenia, Anxiety, Eating Disorders, and every other mental illness. Surely we wouldn’t talk in terms of physical illness as being cancer? So why treat mental illness differently?’

‘As for celebs being the spokesperson for mental health, fine. But I would rather have as my spokesperson the woman who sat in the psychiatrist’s waiting room the other day; who had to bring her young child to the appointment because she couldn’t afford childcare; who told me how she had no idea how she was going to pay the electricity bill, let alone find money to do the grocery shopping; who was trying her hardest but who looked as if life had finally beaten her. This is the real face of mental illness’

I don’t know, I don’t know where I’m going at this stage. I’m tired, and I’m hugely frustrated by everything that’s happened with our mental health services on a national level, particularly in the last week, and on a personal level, for the last……….well, long time.

I just want to see open, honest, real conversation about this. About depression. About bipolar. About borderline. About schizophrenia. About all the other countless illnesses that affect us.

Mental health and the media (Sunny spells and scattered showers)

The Kindness Of Strangers

26 thoughts on “Different Shades Of Blue”