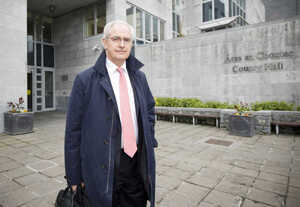 “There are serious challenges when it comes to things like tubal ligation, IVF services, abortion, gender reassignment surgery, etc. None of these are allowed in Catholic-controlled hospitals around the world and it’s a puzzle as to why the nuns, or religious Sisters of Charity would want to be involved.

“I mean I can’t imagine them being comfortable with a hospital which is effectively under their control doing these sorts of things in one of their hospitals.”

St Vincent’s Healthcare Group is refusing to allow an application for planning permission go forward to An Bord Pleanala until the Holles Street board agrees to come under its corporate governance structure.

Meanwhile, in today’s Ireland edition of the The Times, Justine McCarthy writes:

What really upset St Vincent’s have been the legitimate concerns raised in the media about a hospital group that is owned by an order of Catholic nuns taking control of the state’s national maternity hospital.

Historically, the church’s grip on women’s wombs has produced some of the tawdriest and most tragic scandals of the Irish state.

Think of the mass graves in Dublin’s High Park laundry and Tuam’s mother and baby home. Think of the mothers who had their pelvises sundered during symphysiotomy and the dying Savita Halappanavar being told she could not have her doomed pregnancy terminated because “this is a Catholic country”.

The Religious Sisters of Charity ran three of the Magdalene laundries covered by the McAleese report, which catalogued the systemic indentured servitude of pregnant girls and women, and which led to Enda Kenny’s apology in the Dail.

The nuns have refused to contribute to the state’s compensation scheme for the women. Meanwhile, St Vincent’s group receives over €200 million a year from the exchequer.