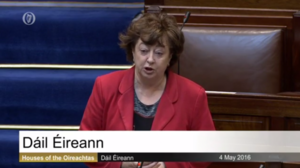 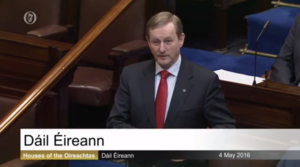 You may recall the publication of the Second Interim Report of the Commission of Investigation (Irish Bank Resolution Corporation) at 9pm last Friday evening before the May Bank Holiday weekend began.

This was two weeks after Justice Brian Cregan completed the 29-page report which has been beset by issues of confidentiality.

Catherine Murphy:“… I raised an issue last week at the Whips’ meeting about the Cregan inquiry which reported to the Taoiseach on 15 April. It was published last Friday night and I understand there is an extension of time again. The Taoiseach needs to give some clarity on where this inquiry is going because it requires legislation on both privilege and confidentiality if it is to proceed. The judge could not have been clearer on what is required.

“The Taoiseach needs to outline what direction this inquiry is taking. Will it be something that is just constantly stretched out? Every week it continues it involves costs to do its work. It is absolutely essential that clarity is given on whether legislation will be produced in those two areas and if there a prospect of a conclusion to it.”

“A debate on the report is also needed in the House. It is the second interim report, which pretty much reinforces the point which was made last November, that legislation is needed if the inquiry is to proceed to a conclusion for public consumption.”

Enda Kenny: “… In regard to Deputy Catherine Murphy’s question on the Cregan interim report, the report was cleared at Cabinet last week. Believe me, there was nothing sinister in the fact that it was published on the Friday of what happened to be a bank holiday weekend.”

“I know that is always the story – that one is trying to ensure it is not seen. Let me put it this way. I can tell Deputy Murphy that I have looked at this and have given it a two-month extension. Mr. Justice Cregan has pointed out a number of challenges. Some of them are legal and some of them are constitutional, but there are a number of options to be considered.”

“I would be happy to accommodate Deputy Murphy with a meeting either today or tomorrow to let her have the up-to-date, accurate range of those opinions, which include the possibility of a full-blown public inquiry.”

“When we consider that the Moriarty tribunal ran for 13 years at a very costly sum to the taxpayer, these are options that need to be considered. I will facilitate Deputy Murphy and anyone else and bring them up to date on where it now stands arising from Mr. Justice Cregan’s interim report.”

The second interim report can be read here

19 thoughts on “‘Nothing Sinister’”