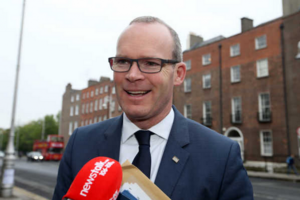 This morning, newly appointed Housing Minister Simon Coveney spoke to Seán O’Rourke about housing on RTE Radio One this morning.

Towards the end of the interview, they discussed water charges – which will suspended for nine months, from the end of June, as a commission decides what to do.

The Fine Gael minister assured Mr O’Rourke, “I certainly agree that people who have paid already shouldn’t be disadvantaged financially in any way… People will not be allowed to get away without paying.”

Then Mr O’Rourke reminded Mr Coveney how Independent Alliance TD, who has been appointed a Super Junior Minister for Disability, Finian McGrath has not paid his water charges.

Seán O’Rourke: “Meanwhile, sitting in the Cabinet room along with you and your colleagues, you have Finian McGrath who is proudly boasting that he has no intention of paying his water charges.”

Simon Coveney: “Well I haven’t seen him proudly boasting that and Finian will…”

O’Rourke: “Well stating as a matter of fact then, to put it maybe slightly less..”

Coveney: “Well now let’s not build this issue up into something it isn’t. I mean people should pay their water.”

O’Rourke: “It’s a minister flouting the law and he’s sitting in the same Cabinet room as you. Is that right?”

Coveney: “Well I think, you know,my view would be very similar to, to, you know,  people like Regina Doherty and others who’ve been asked to comment on this.”

O’Rourke: “How can you expect people to pay water charges up until their suspended when you’re sitting beside somebody who just makes a virtue of not paying?”

O’Rourke: “It’s also a decision for the Taoiseach actually. Is he prepared to keep him in the room?”