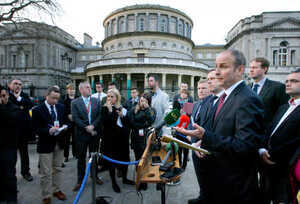 Fianna Fáil’s confidence agreement with Fine Gael leaves us with an opposition party on the fence.

The white smoke has billowed. Just 70 days since the country went to the polls we have a Government – or something resembling one anyway.

It wasn’t without it’s drama and Frank Underwood would probably blanch at the deals that were likely done by Michael Noonan in the 12th hour as Independents wavered on the brink of acquiescence.

The juicy prize was wagging in front of them but in their peripheral vision they could see angry constituents asking them to uphold their pre-election promises.

In the end the spectre of the prize won out for the majority of them and Enda’s wife relaxed in the Dáil gallery safe in the knowledge that her trip to the Dáil to witness the coronation was not to be in vain. For those political anoraks amongt us it was akin to a really gripping episode of House of Cards.

And what a house of cards it has delivered; a situation where the ‘main’ opposition party has a supply and confidence agreement with the main Government party. It’s kind of hard to oppose stuff when you’re tied into expressing confidence in it.

That said, I welcome the new form of politics that this Dáil will inevitably require however I think a signed agreement to supply confidence goes a step further than simply acting constructively in opposition.

It’s one thing to be a practical opposition party or independent that will consider each issue on its merits and vote accordingly (opposition should not mean NO to something just because it originates from the Government side) but it is an entirely different thing to have a signed agreement forcing you to support a No Confidence Motion in a Minister about whom any kind of dodgy revelations or evidence of poor decisions might surface.

It’s going to be a really difficult fence for Fianna Fáil to sit on and their arses will be tormented with splinters by the time the fence topples. While they sit on that fence Sinn Féin will continue to lob dung balls at them as apparent supporters of Government and some of that dung will stick.

To counteract this, Fianna Fáil will feel the need to assert their opposition credentials by creating the odd convenient row with Fine Gael but nothing that’s going to be too controversial or threatens to bring the cosy arrangement to the ground – at least not before the opinion polls suggest it might be in their interest to do so!

I love an auld opinion poll, it comes with the territory of being one of those nerds but watch now as suddenly opinion polls become a main conversation point in the local boozer on a Saturday night.

Plenty of ‘Jaysus, Fianna Fáil are hitting 33% and Enda’s only on 26%, I’d say they’ll pull the plug soon’ dramas will ensue and in the midst of yourself and myself looking at them, behind the scenes the strategists of both Fianna Fáil and Fine Gael will be glued to them.

To say that they won’t impact on longevity of Government decisions is wholly unrealistic. Of course they will and it’d actually be irresponsible if they didn’t.

There’ll also be key flashpoints throughout the next few months not least the leadership issue within Fine Gael. While the general wisdom on the surface suggests that there is no grá for a bitter leadership battle and the door will be edged open to allow Enda to exit stage left gracefully, in reality once the knives start circling they tend to become sharp very quick.

The same general wisdom suggests that Leo Varadkar is the front-runner by a country mile to take the reins. Should that be the case, I reckon you’ll see Fianna Fáil’s supply of confidence go south very quick as Leo sharpens his teeth on their neck!

All this before even getting to Michael Lowry’s agreement with Fine Gael –  but that’s a whole other days work right there.

64 thoughts on “The Loyal Opposition”