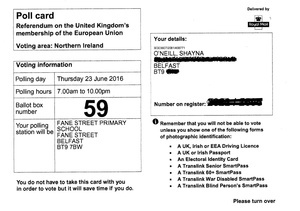 It’s here!  My polling card arrived this morning for the much anticipated, will they/won’t they referendum on Britain remaining in the EU.  I’m not native to Belfast but live here, registered to vote and here it is – my opportunity to re-shape Europe? (Bit grandiose I know)  It’s pretty straightforward YES/NO, one tick in the box. Now, how should I vote?

Previously: Can You Vote In Brexit?

Meanwhile… Official Ireland has it all wrong – we could win big if UK opts for Brexit (David McWilliams, Independent.ie)