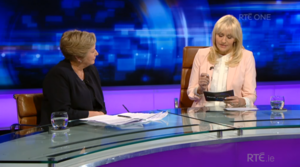 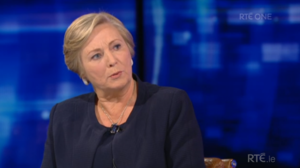 Ms Fitzgerald’s appearance came after journalist Katie Hannon revealed transcripts of the exchanges between Mr Smyth and Mr O’Higgins which can be read here.

Miriam O’Callaghan: “Were you taken aback to discover the approach that the Commissioner and her legal team took in the O’Higgins’ investigation which was to challenge the motivation and credibility of the whistleblower Maurice McCabe? Were you taken aback by that?”

Frances Fitzgerald: “Well, let’s put this into context. What we’re hearing about tonight is partial evidence, apparently, a transcript that was given at a Commission of Inquiry that interviewed 97 witnesses, took over 34 days of hearings, was held in private – nobody asked for it to be held in public – and a couple of weeks ago we had the report given to me and then published after certain legal actions, 360 pages of a report, making a lot of recommendations, having examined the issues that Sean Guerin had examined in a preliminary way two years ago.”

Fitzgerald: “Now it’s illegal to publish these transcripts. For me to comment on them, I don’t know whether their partial, whether they’re full and I think it is undermining of the overall commissioned report when we select out certain transcripts. So I do have to make that point…”

O’Callaghan: “…which was: are you taken aback by the approach that the Commissioner and her legal team took at the O’Higgins investigation in relation to the whistleblower Maurice McCabe? Because, in public, the Commissioner was talking about valuing his role as a whistleblower and yet, in private, in these sessions – and they’re now public –  she was actually actively challenging the motivation and his credibility.”

Fitzgerald: “I don’t think it’s appropriate for me, as minister for justice, to go into the details of the instructions that were or weren’t given to a particular legal team…”

O’Callaghan: “But they’re in the public domain now minister.”

Fitzgerald: “Illegally and one doesn’t know how comprehensive they are, but the point I want to make…”

O’Callaghan: “That’s the role and the approach that the Commissioner adopted. And I’m just asking you: are you surprised at that approach?”

Fitzgerald: “What I have to say to you is that you’re asking me to second guess the commission effectively by your question. Because what we have is a Justice O’Higgins who heard all of the evidence, who was in the unique position to hear everything, to see the approach of all the different legal teams, to interview witnesses and in his final report he does not include the particular points that you’ve made.”

O’Callaghan: “Are you happy that this was excluded?”

Fitzgerald: “But what I have to say…”

O’Callaghan: “No, no, actually, that’s an important point minister.”

Fitzgerald: “It is an important point.”

O’Callaghan: “Are you happy that that exchange was excluded from the final report?”

O’Callaghan: “You just said it wasn’t in the final report…”

O’Callaghan: “And I’m asking you are you surprised that exchange isn’t in the final report?”

Fitzgerald: “But I have to accept what Justice O’Higgins who we gave the statutory responsibility to do: to do this investigation, this Commission of Investigation. This is a methodology that’s, if you like, well tried and tested. I accept fully, as does the Government, the findings in the report and I believe we should be focusing on those now and the role of victims particularly and the changes that are needed to be made in An Garda Siochana in relation to investigations but in relation to the Commissioner, can I say that, what I have to go by, is what she said in her statement last night where she says that ‘Sgt Maurice McCabe’s contribution is valued and the service is changed for the better in response to the issues about which he complained’.”

O’Callaghan: “But minister, that is totally at variance with what her lawyers, acting on her instructions, were doing and saying about Maurice McCabe…”

Absolutely Nothing To See Here