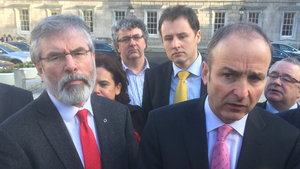 They were made for each other.

I think we may have been putting Fine Gael and Fianna Fáil under too much pressure to consummate their relationship. Fianna Fáil could have a more obvious suitor in Sinn Féin.

Think of it. Two parties on similar trajectories. Each claiming to itself the republican mantle. A more recent split than that of the treaty/anti-treaty conflict, and one which is capable of more obvious repair.

This requires a slight imaginative leap.

The self titled Sinn Féin of today is not the Sinn Féin of 1926 from which De Valera took its brightest and best, as well as the bulk of its political infrastructure, when he was founding Fianna Fáil.

Present day Sinn Féin is a breakaway from the rump that De Valera left behind.

That collective grouping in claiming a Sinn Féin nomenclature caused upset among the majority from the first Dáil, that had subsequently supported the Anglo Irish treaty.

So the Sinn Féin of 2016 is a breakaway from a rump of a minority that had lost the essential argument on the founding of this State.

But fair dues to the party that should be more rightly known the H-Block party, they have assumed and rebranded the title well.

The party has copied the Fianna Fáil playbook just as well. Like FF, in it is beginnings, its leader presents himself as statesmanlike and distant from violent activity. His chief lieutenant, like Sean Lemass of FF, is more candid and open about his use of violence.

The Sinn Féin of today, like the FIanna Fáil of then, saw the need to establish a strong local political infrastructure.

Both parties, as they sought to establish themselves, have experienced irritation on their left flanks from those seeking to keep them in a philosophical cul de sac, away from their more comfortable political destination of populism.

Although it can’t be stressed enough that Paul Murphy, the 21st century irritant, is no Peadar O’Donnell, a far more authentic socialist of the 1930s.

Given these symmetries why shouldn’t we ask why FF and SF are two separate parties?

Together they would be thirteen seats short of a being a single party government we thought would never again be possible.

It wouldn’t be without difficulties. Who would be the leader? Policies would be far less of a problem as they could be constantly adaptable.

The synergies would be obvious and immediate. There would be no need to hold parallel Easter, Arbour Hill or Bodenstown commemorations.

There may be a fear that merging might give an opportunity to the next largest opposition group – The Labour Party. Okay that’s not really a risk, just thought I would mention it.

The real problem would be what the name of this new merged party should be. Here I think I might be able to help. It has to be a name that looks towards the future whilst building on the past.

The new party should be called ‘Sinn Fáil – Our Destiny’. It is the party Irish politics has been crying out for.

Far From The Maddening Crowd

126 thoughts on “Our Destiny Awaits”