On tomorrow’s Late Late Show…on a mission to revolutionise Ireland’s attitude toward vegetarian and vegan food, The Happy Pear brothers David and Stephen Flynn will be in studio to tell us the secrets of their super healthy lifestyle…

Christy Moore will be in studio to chat about his brilliant career, still going strong after 47 years in music,

Former rugby international Alan Quinlan broke new ground when he became one of the first sportspeople in Ireland to open up about battling with mental health. He’ll be filling us in on changing attitudes toward mental health in sport and why more needs to be done…. 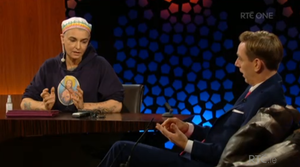 113 thoughts on “Staying In Tomorrow?”