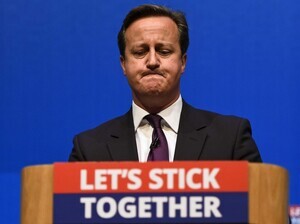 Britain will stay but Cameron must go.

This withering assessment of Great Britain’s place in the post war world was made by former US Secretary of State, Dean Acheson in his famous 1962 West Point Academy speech.

The quote has been echoing in my head over the past few week as as I listened to a number of the key Brexit proponents making the case for Britain leaving the EU.

As the former Greek Finance Minister, Yanis Varoufakis, who strongly favours the UK remaining in the EU, said over the weekend; a legitimate case can be argued for the UK exiting on the basis of sovereignty and democracy.

But that is not what we hear from the key spokespeople on the leave side.

Not only have they increasingly concentrated on the nastier side of the argument, focusing, Donald Trump-like, on immigration, regulation and spurious statistics, they been employing the outdated jingo-ism of little Englanders.

The leave arguments deployed by such people as Iain Duncan Smith, Boris Johnston and Nigel Farage seem more suited to the last decade of the 19th century than they do to the second decade of the 21st century.

They campaign as if they had each stepped just out of a Pallisers novel, totally unaware that Great Britain was no longer at the head of a global empire upon which the Sun never set.

Not only do they use the inflated rhetoric and hyperbole of a long past era, it is as if they blame the EU for the decline in British power and influence that had been a fact of life long before Britain joined the (then) EEC.

The historical analogies they invoke are at best exaggerated and at worst, bogus.

Take Boris Johnson’s outlandish assertion that President Obama was urging the UK to remain due to Obama’s “part-Kenyan” heritage and “ancestral dislike of the British empire”.

Similarly, consider Duncan Smith’s response when asked who might be the UK’s main trading partners trade post Brexit. He suggested India, Hong Kong and several other places with whom, he said, Britain had such historic ties.

“Historic ties” in this context being a euphemism for former colony – hence why Acheson’s quote comes to mind.

The post empire “role” that Britain has found for itself, as a leader in the EU, is one that sits badly with those at the top and and at the bottom of the leave campaign. Perhaps because it is a role they must share with others, rather than impose.

The issue is not whether UK will or will not survive outside the EU.

The UK is the fifth largest economy in the world and had been for the past few years – just behind Germany as the fourth largest and just in front of France as the sixth largest.

The British economy is not going to implode outside the EU, but it is naïve in the extreme to imagine that Britain’s economic success is not due, in some measure, to its membership of the EU trading bloc and the access that gives to a market of 500 million plus people?

Could the UK attract the same degree of investment and interest if it only offered access to a market of 65 million?

Surely it is incumbent on those who urge a leave vote to produce something more to support their call for a leap into the dark than mere rhetoric and John Bull.

Contrast the leave arguments of the self anointed grandees with the Remain case being made by a real grandee such as Sir Nicholas Soames, M.P., a grandson of Winston Churchill.

Soame’s Twitter account has become one of the big hits of the referendum campaign, as he daily takes the Brexiteers to task, dismissing their little englander arguments with wit and aplomb:

Perhaps it is the wisdom of age and the experience of bitter political infighting on Europe, but it is now Soames, along with other Tory grandees, such as John Major, Ken Clarke and Michael Heseltine who are the Tory voices of common sense, realism and the future.

Whatever the outcome of the referendum – and I strongly believe it will be remain – Cameron has managed to both damage his leadership and divide his party.

While he may have hoped an In/Out referendum may put an end to the decades long Tory division on Europe, he has mishandled both the project and the process from the start.

Less than a year ago he was telling voters that he would have no difficulties urging voters to leave the EU if he did not get the key reforms he needed to stay, particularly on the right to free movement.

Despite the hype and drama, the reforms he actually got are no where near the demands he had made, so how can he credibly claim that those now urging Leave are reckless for saying now what he said a year ago?

He has turned a national referendum on a vital political question into a proxy battle for the identity of the Tory party. Not only that, but he has managed to do it at precisely the same time as the main opposition party is having a major identity crisis of its own.

It is not only Britain that is still looking for a role, so are its two (and a half) main parties.

35 thoughts on “Leave To Remain”