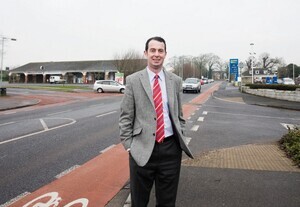 Mr O’Rourke, who lives in Celbridge, Co. Kildare, is paid an extra €16,000-a-year in tax-free expenses because his commute to work is 500 metres above the threshold for politicians that live close to Leinster House.

Shane Beatty: “You’re going around in circles and bringing up the council here.”

Beatty: “No, but you didn’t answer it, Frank, my question was when did you realise that because you live less than 500m above the threshold that you can potentially earn €16,000 more than if you lived just under 25 kilometres. That’s all I want to know.”

O’Rourke: “Yeah, you’ll only raise…I realised that probably properly when the journalist contacted me about a week and a half ago because when you submit…”

Beatty: “And did you get a shock? Like did your jaw drop to the floor?”

O’Rourke: “No, Shane, interviews can be selective and it probably suiting the interview for you to be selective. The reality here is you submit the information and the information is adjudicated. If I was .5 of a kilometre under the band, we wouldn’t be having this conversation. When I was a councillor for five years and when I was the lowest councillor on the list, claiming expenses for the five years which there’s absolutely the right thing to do – you only claim what you’re entitled to claim. That’s all I’ve ever done, that’s all I’ll ever do, I never got any airplay over that. Whenever the terms and conditions of any scheme is changed or altered, I will abide by that because I’m not motivated by that. I’m motivated about working hard..”

O’Rourke: “Delivering for the constituency and anything I get I put it back into giving my constituency and constituents the best possible service which I do and I’m renowned for doing and I’ve a reputation for delivering.”

O’Rourke: “And that will continue.”

Beatty: “But Celbridge is seen as a commuter town and very much, for a lot of people, people would feel it’s an add-on or an addendum to Dublin. I mean you have Dublin Buses, the clue is in the name folks, Dublin Buses going in to Celbridge. Were you stunned when you realised that to travel from your house to Leinster House, that you will receive €25,000 in expenses, for that, a year?”

Beatty: “Two things there. One is you haven’t made any allowance for all of the work that’s done by me and others. We were talking about me in this case this morning. Travelling in the constituency, carrying out very diligent work with clinics, with meetings, etc. For example, you’re welcome to join me any day you want, starting at 7.30am in the morning and, like last night, finishing at 11 o’clock. That’s what I’ve signed up to. I’m interested in politics, I’m driven by delivery, I’m happy to continue to do that.  So you’re not taking that into consideration whatsoever and, obviously, when those limits are set, by the Houses of the Oireachtas and the Department, which is hugely important to put in play here, in being it’s done on that basis. I have no control over Shane and you know this and I have no input to any limits that’s being set. However, however if those limits are reviewed, and they’re changed, then fine, I’ll work with them but no matter where you change the limits, Shane, no matter where you put the limit, there’s always going to be someone having a similar conversation with you that I’m having with you. It could be somebody else another day. And the reality is Shane, when is a limit, when is a limit, Shane, and a band not a limit. Because if you change the limit to 35km and someone is 35.5, you’ll be having the same conversation with them so when does all that become a reality. That’s the question.”

Beatty: “You’re very keen to say you’ve done nothing wrong and you haven’t done anything wrong and the rules are that if it is, if you live over 25 kilometres away from Leinster House you’re in the higher band when it comes to your expenses. But I just want to talk morally here, how does it sit with you, that to drive from Celbridge to Dublin, you receive €25,000 a year, effectively for petrol?”

O’Rourke: “But that’s, Shane, you’re not looking at it in an open way…”

Shouting It From The Rooftops