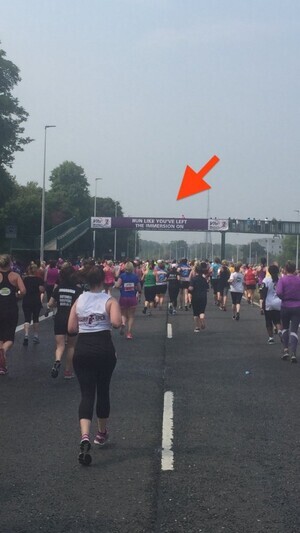 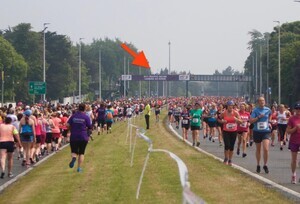 “Last Monday I was a participant in the “fast jogger” category of the women’s mini-marathon, running with my aunt, a victor over breast cancer, in Dublin on a hot summer’s day.

On three occasions I was exposed to what what I would consider sexism in the form of “motivational” slogans: “Run like you left the immersion on!”, “The N11 never looked so good!” and “Don’t worry, ladies, the hair still looks gorgeous!”

The first two slogans appeared in fabric stretched across the footbridge of the Stillorgan dual-carriageway.

The latter was shouted by a member of the Order of Malta. To my astonishment, most women around me did not find fault with any of these slogans.

In fact, they cheered on the troglodyte and seemed genuinely validated by his creepy flattery.

Are the old concepts of our worth as women so embedded into the female Irish psyche that comments such as these automatically elicit a positive response of appreciation or, at the very least, an embarrassed smile?”

‘Run like you left the immersion on!’ – Everyday sexism and the mini marathon (Irish Times)

Were St Joseph’s Centre for dementia care being sexist when they made the same immersion joke for their campaign? pic.twitter.com/axeFJMpzcW

Pics via CJNíChléirigh and Lindie Naughton

330 thoughts on “Demeaning The Female Race”