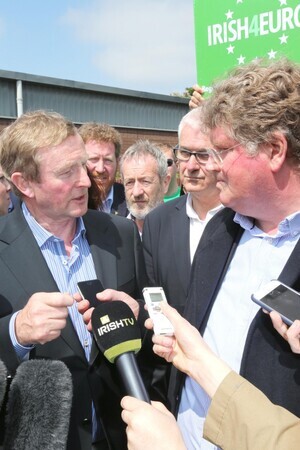 The question has been asked what does today’s Brexit decision mean for Ireland. The short answer, as with so many other questions arising out of today’s vote, is that no-one entirely knows.

Volatility and uncertainty will be the order of the day for the short to medium term, certainly for those of us working and living in the UK.

The vast majority of younger voters, 75 per cent, voted to remain. But the million extra votes of older, predominantly white, people in England and Wales, fearful of the future and resentful of the recent past, denied them that future as integrated Europeans.

They will be long dead while those younger voters deal with the consequences.

They also denied the Scots, the people of Northern Ireland, and London.

That English heartland, and its annexe, Wales, which, remember is technically a Principality and not, as Scotland is, a country with its own parliament, wanted to give a kicking to London and Westminster – and could not have cared less about Belfast, Edinburgh, or even Dublin.

Several of those areas outside London and the south east have borne the brunt of decades of deindustrialisation, underinvestment, poor education and austerity – and a steady torrent of misinformation from their elected representatives on all sides.

And that has got worse since the last economic crisis while they have watched London prosper almost as a City state.

They wanted to inflict a blow, and they have.

House building and banking are predicted to go into reverse, with job losses in the financial sectors and property prices in retreat. That is the prediction for the immediate to short term. How much long after that is anyone’s guess.

The value of sterling will fall, it is just a question of how far and for how long. That will not just affect the cost of British people’s holidays abroad but their pensions and the cost of government borrowing.

In Northern Ireland where the SDLP, Sinn Féin, Alliance and UUP – and vast majority of people living there from all traditions – wanted to remain, there are now the seeds of political volatility.

Not least because the DUP’s current leadership appears to have wanted all along to systematically dismantle the Good Friday Agreement by the back door.

Sinn Fein, meanwhile, wants a Border Poll. It is hard to see how those positions can be squared in a hurry but then, as has been clear, the welfare of Northern Ireland does not appear to have been uppermost in the thoughts of Northern Secretary Theresa Villiers.

Scotland will find itself, for the second time in two years, at a political crossroads, and its direction of travel is by no means certain.

What seems certain is that Britain, which for 43 years prospered within the European project and saw economic growth, has been told to expect to see that growth shrink.

A prosperous Britain is good for Ireland, a shrinking British economy isn’t.

Outside London much of England and Wales is a low-skill, low-wage, economy which always left it vulnerable to displacement by migrants who, by the very fact they are migrants, suggests they are by definition more driven.

The Brexit campaigners exploited the aforementioned disaffection and, taking a leaf from recent US political campaigns, decided early one that “if you’re going to lie, lie big”. And they did. For George Osborne’s misjudged Project Fear they responded with Project Hate.

Any and all attempts to engage with facts failed. Michael Gove said people did not want to hear from “experts” and even suggested the Nazis had deployed them against Einstein.

Meanwhile Nigel Farage denounced “big business” and “the rich” (like Bob Geldof) while, of course, having very wealthy backers behind the scenes.

History has shown what kind politics that kind of rhetoric can produce.

Meanwhile, the people who started to pull apart the UK’s membership – and possibly even its own constitution – have not once suggested they have a coherent plan or detailed substitute for its EU membership not least because it is now clear that Boris and Farage expected to lose, or at least didn’t expect to win. Just like the Tories in the General Election last year.

Now Nigel Farage, who has several times failed to be elected as an MP, is arguably the single most effective or successful British politician and has been flashing ankle to…the Labour Party, whose voters in England and Wales have given him this victory.

And there is no suggestion that the reduction in migration those supporters want is likely to ever come about…especially as the Brexiters are now saying they never actually promised it would.

Little England looks today like it has shrunk the UK – both economically and on the world stage – but inflated the hopes of Marine Le Pen and Geert Wilders in France and the Netherlands.

Should the wheels come off the EU, as so fervently wished by Nigel Farage in one of his many victory speeches today, that too, of course, is particularly bad news for Ireland

And here, in the meantime, we’re all going to need the best guesses of those same experts decried by Michael Gove.

23 thoughts on “Letter from Little England”