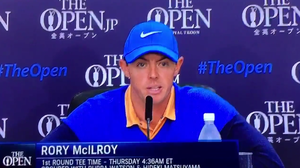 Rory McIlroy speaking at a press conference this morning

Rory McIlroy commented on his decision at a press conference this morning ahead of The Open.

Rory McIlroy: “I’ve no regrets about it [deciding not to take part in Rio Olympics] and I’ll probably watch the Olympics but I’m not sure golf will be one of the events I’ll watch.”

Reporter: “Which events will you watch in that case?”

McIlroy: “Probably the events that, track and field, swimming, diving. The stuff that, the stuff that matters.”

Rory McIlroy Gets Brutally Honest About Golf At The Olympics (Balls.ie)

28 thoughts on “‘The Stuff That Matters’”